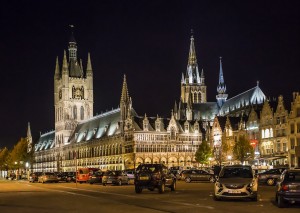 However you pronounce this Belgian town, in French, Dutch or Tommy, one thing is certain, you will be overwhelmed by its beauty and typically Flemish architecture. Guided Battlefield Tours stay in this lovely town on a number of our World War 1 tours. At first sight, you will find it impossible to believe that less than one hundred years ago, it was a town in complete ruin – a tragic casualty of the First World War, destroyed because of its strategic position and because it stood in the path of Germany’s planned sweep across the rest of Belgium and into France from the north during World War 1. Ypres became the scene of numerous battles, including the infamous Battle of Passchendaele in 1917. Nearly a third of all British soldiers killed on the Western Front died at Ypres.

There are many photographs in existence of the devastation wreaked on this once prosperous medieval Flemish cloth town, renowned for its linen trade (as mentioned in Chaucer’s Canterbury Tales), and the horrors of the Great War can be seen in the restored and magnificent Cloth Hall, which is now home to the impressive and award-winning In Flanders Field Museum. The large central Flemish central square boasts a host of restaurants where you can try traditional Belgian specialities (moules-frites, local beers) as well as several chocolatiers to tempt you.

On our Ypres Remembered, Chapters from the Western Front and Treading in Tommy’s Footsteps tours, we explore this beautiful town that was defended by British troops from October 1914, suffering three long and destructive battles, and visit important sites nearby – the gas attack memorial at Vancouver Corner, Tyne Cot cemetery and the Menin Gate for the Last Post ceremony. On several of our tours, we have been fortunate to have guests who have had family members who fought during the First World War and we have been privileged to make arrangements for them to place wreaths at the Menin Gate during the Last Post ceremony.