On the eve of the First World War, there was no tradition of nationally commemorating mass casualties in war. Then came the devastation of World War I and nothing could prepare the warring nations for the trauma and loss of young men on this vast scale. The casualty tolls are well documented, as is the history of how the memorials came into being.  Fabian Ware’s 1937 The Immortal Heritage: An Account of the Work of the Imperial War Graves Commission During Twenty Years, 1917–1937, is a fascinating account of how the memorials and cemeteries commemorating the dead of The First World War came about. We visit a number of these memorials on our World War 1 tours, including the two most imposing.

The Thiepval Memorial to the Missing of the Somme

We visit this extraordinary memorial on our Recalling the Somme tour, Treading in Tommy’s Footsteps tour and Chapters from the Western Front tour, but perhaps the best view is on the Walking the Somme tour as we walk up from the valley of the Ancre.

The Thiepval Memorial to the Missing of the Somme is a memorial to the 72,191 missing British and South African men who died with no known grave in the Battles of the Somme between 1916 and 1917. Situated near the village of Thiepval in Picardie, it is probably one of Sir Edwin Lutyen’s greatest creations.   The memorial, which dominates the surrounding rural scene, has sixteen piers of red Accrington brick faced with Portland Stone and is an impressive 46 metres high, with foundations 6 metres thick which were required due to extensive wartime tunnelling beneath the structure. Built between 1928 and 1932 Thiepval is the largest British battle memorial in the world, and all who visit it cannot not fail to be moved by the enormity of loss engraved on its walls.  On our tours, as well as paying our respects to those who fell at the Somme, we visit the visitors’ centre next to the memorial.

We take part in the moving Last Post ceremony underneath the Menin Gate at 8pm on our tours Ypres Remembered, Chapters from the Western Front, Treading in Tommy’s Footsteps and Battles of 1917–1918. 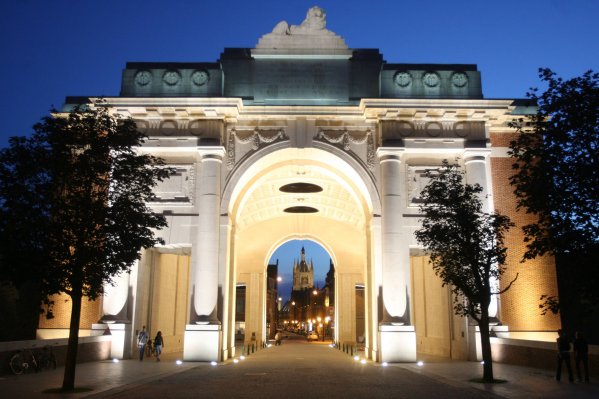 After the end of the First World War, the allies mooted the idea of leaving Ypres in ruins as a memorial to the four years of war that led to the town’s destruction.  This idea was swiftly put to one side when the locals (understandably so), wanted to return Ypres to the beautiful and prosperous city it once was. Ypres had seen more casualties than anywhere else on the Western Front and after discussions between the various committees, a compromise was reached. The Menin Gate, through which every soldier knew as the way to the battlefields, would become a memorial dedicated to the 54,406 British and Commonwealth soldiers who were killed in the Ypres Salient to 15 August 1917 and who have no known grave; another 34,952 missing are commemorated at Tyne Cot. A magnificent example of Sir Reginald Blomfield’s architectural designs, the Menin Gate Memorial was unveiled on 24 July 1927 and the Last Post has been played every night at 8pm since 1929 with the exception being during German occupation in the Second World War when the ceremony was carried out in Brookwood, Surrey.