On our battlefield tours, we remember the men and women from all of the services who served on the Western Front during the First World War.   Our tour ‘The Battles of 1917-1918’ visits the Arras Flying Service Memorial.  Major Edward Mannock is commemorated here and is possibly the most highly decorated man of World War 1 being awarded the VC,  the DSO and two bars as well as the MC and bar.  He was awarded the VC posthumously in 1919.  Major ‘Mick’ Mannock was Britain’s leading flying ace having shot down 61 enemy planes and balloons.  He died on 26 July 1918 when his plane was shot down in flames.  He was terrified of dying in this way and always carried a revolver with him and planned to shoot himself if his plane caught fire. 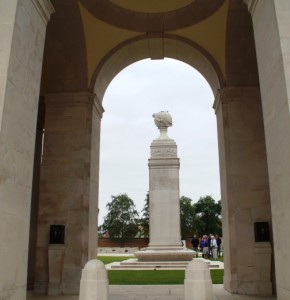 Captain Samuel Frederick Henry Thompson DFC, MC, known as ‘Siffy’ is also commemorated here.  He was born in London in 1890 and attended the Roan School in Greenwich.  He joined the Royal Flying Corps and within five months reached the rank of Captain and became the highest scoring ace in the 22nd Squadron.  He shot down 30 enemy planes before he was killed over Cambrai on 27 September 1918. His DFC citation appeared in the London Gazette of September 1918 reads:

This officer has carried out numerous offensive patrols, displaying the most marked bravery and determination.  His boldness in attack and utter disregard of personal danger affords a most inspiring example to his brother pilots.

His citation for his MC reads:

For conspicuous gallantry and devotion to duty as a fighting pilot.  During recent operations he destroyed five enemy machines.  He showed great courage and skill, and by his keenness and dash set a fine example to all.

On our Chapters From the Western Front tour we also visit the grave of Thomas Mottershead VC, shot down near Ypres in January 1917. 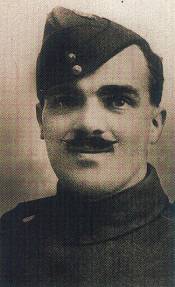 The role of the RFC was crucial to the offensives on the Western Front.  These men carried out essential observations, mapping enemy positions and spotting for the artillery which began to dominate the battlefield.  As planes became more sophisticated, single seater scouts (fighter planes) were developed to protect slower observer aircraft and to defend one’s own airspace from intrusion, the two sides frequently meeting in deadly dogfights. In his book ‘Sagittarius Rising’, Cecil Lewis describes the type of person who became a pilot as someone who is cool and calm.  He explains that a pilot must not give way to anger as perhaps the infantry could in battle.  To lose one’s temper would lead to a lack of precision which could lead to death.  One can only imagine the fear felt as, alone in the sky, a stricken plane spun to the ground.

Aircraft became more and more sophisticated as the war developed and began to adopt a far more extensive role. Bombing raids behind enemy lines became a regular feature of the war, as did bombing raids on the enemy’s homeland. In the final campaigns troops advancing on the ground would be supported by aircraft bombing and strafing ahead of them as a standard feature of attacks.