On our battlefield tour ‘Poets at War 1914-1918’, we visit sites where Wilfred Owen served on the Somme. Because his poetry is often studied in schools, Wilfred Owen is perhaps one of the most widely read of the First World War poets. His experience of the Battlefields on the Somme is brought to life both in his poems and his letters to his mother. He first saw action at Serre in January 1917 when he led his men through a morass of mud and slime to the Quadrilateral which had been a heavily fortified German Redoubt.

The village of Serre had the advantage of being situated on a rise of land and the northern pals battalions that attacked it on the 1 July 1916, the first day of The Battle of the Somme, suffered severe casualties. By the end of The Battle of the Somme, the British front line had pushed forward and in November the villages of Beaumont Hamel and Beaucourt were taken during The Battle of the Ancre. However, Serre remained in German hands. Over the winter there were no major battles, but there the British continued to wage limited offensives; although the German troops still held the village of Serre, they were beginning to consolidate their positions and had withdrawn from some of the ground in the Quadrilateral.

This was the situation that faced Owen when he arrived at the Quadrilateral which lay between Serre and Beaumont Hamel on the Somme battlefield. In his letter to his mother he tells her that he was not at the front line but behind it. Arriving at the abandoned German dugouts late at night on Friday 12 January 1917, he wrote that he and his men were ¾ dead; he did not mean that ¾ of them had died, but that each man was suffering following a gruelling journey to their position. The long and exhausting ‘march’ through the mud of the battle scarred land had taken its toll; many of his company were pulled out of the mud of the deep craters leaving their waders in the ‘octopus of sucking clay’. After posting his men to the dugouts where they would shelter, Owen returned to his post. We see the site of these dugouts on our tour ‘Poets at War 1914-1918’. Throughout the night his company suffered from severe shelling and the sentry here was blown down the stairs of dugout by a shell that landed at the entrance and was blinded. As the officer in charge, Owen rushed to the man Owen revisits this incident in the poem ‘The Sentry’ with the words

We dredged it up, for dead, until he whined, 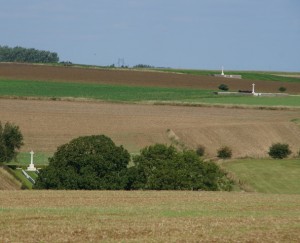 The company were finally relieved on the following Sunday just before midnight, and made their way to their billets in heavy snow. Although behind the lines, Owen supervised his men as they worked at tasks such us repairing roads or digging trenches. Before too long, Owen and his men were ordered back to the front to the Redan Ridge near Serre to observe the German lines. They lay in the snow throughout the long daylight hours; clearly had they stood, they would have been visible to the German observers. Standing on the ridge on our WW1 Poets tour, one can clearly see how exposed Owen and his company were while posted there. Owen lost one man who died of exposure and wrote to his mother to say that ‘only one of my party actually froze to death’. He told her the only thing that kept him alive was that he could feel the intensity of his mother’s love which ‘reached me and kept me living’.