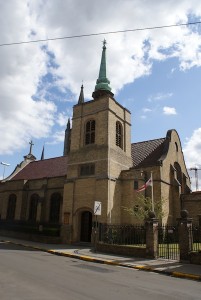 We stay in Ypres on our Ypres Remembered tour and our Chapters from the Western Front battlefield tours. On these tours we visit the numerous sites from the First World War, such as Tyne Cot, Essex Farm and Hill 60, but the town of Ypres itself is also a highlight of these tours. The town of Ypres was almost totally destroyed during World War 1, but following 1918 was restored in a process that took over forty years. Great medieval buildings, such as St Martin’s Cathedral were rebuilt and this is now one of the most striking buildings in the town, visible for miles across the Flanders countryside. The cathedral is certainly worth visiting, as are the fragments of the original medieval cathedral preserved next to it.

Opposite the cathedral you will find St George’s Memorial Church. Designed by Sir Reginald Blomfield who also designed the Menin Gate, the church serves as a memorial to the soldiers who gave their lives defending the Ypres Salient. A series of striking stained glass windows are dedicated to various regiments while memorials to others to regiments, the old boys of schools and individual soldiers line the walls. Each individual chair is also dedicated to a soldier. Hundreds of men, from privates to field marshals, are commemorated and it is a place to sit quietly and think. On an Ypres Remembered tour in 2012, we were accompanied by a family who wished to honour Private Edward Henry Parker who was killed by a German attack on 30 July 1915 where flame throwers were used for the first time. Tour members were honoured to be present at the service in the church when a plaque was dedicated to his memory. 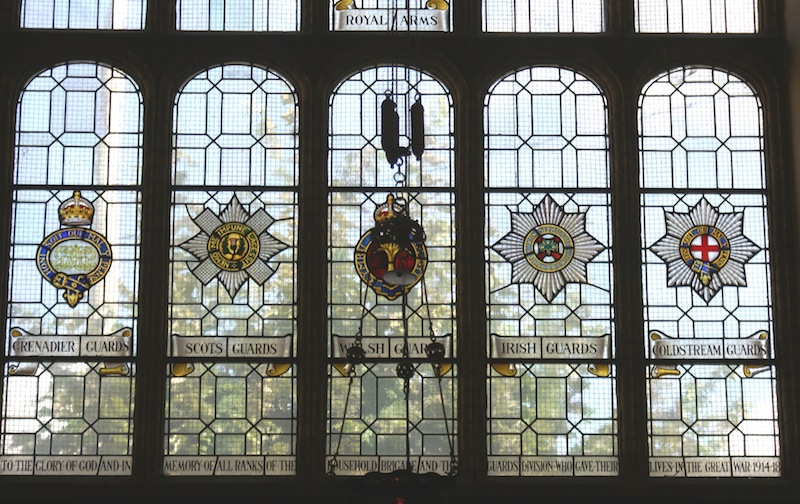 The magnificent square of The Grande Place has also been rebuilt and is dominated by the restored Cloth Hall. This building, which was a warehouse and market for woollen cloth in medieval times, is now home to the In Flanders Field Museum which tells the story of World War 1 in the area. The museum was completely refurbished last year and as it is now also possible to climb the clock tower and gain sweeping views of the surrounding area and First World War battlefields.

The ceremony at the Menin Gate is an unforgettable experience. The Last Post was sounded by the Somerset Light Infantry at the inauguration ceremony of the Memorial to the Missing in 1927. This moving ceremony has been performed every night since November 11 1929 although it was suspended during the German occupation of World War 2. On the day of 6 September 1944, as the German’s were retreating from the town, the bugles were sounded once again. On all our battlefield tours that visit Ypres, you will have the opportunity to attend this ceremony to honour the fallen.

The Ramparts are easily accessed from the Menin Gate itself. You can walk around these massive walls which encircle the town and have defended it for centuries. When you reach Lille Gate, you will find the Ramparts Cemetery. From this small cemetery which holds just 198 graves, you can look at the view across the moat. When you return to the area of the Menin Gate, you can enjoy a drink within its mighty ramparts in a bar easily accessed from the Novotel Hotel. During World War One, this housed a bakery. As you sit at the tables, you can see where the British soldier worked in safety during those grim years. It was in another rampart casement like this one that the famous trench newspaper, The Wipers Times, was printed.