Our battlefield tours offer a number of opportunities to see the remains of trenches from World War 1. On our tours Treading in Tommy’s Footsteps and Recalling the Somme we visit Thiepval Wood. A section of the British front line trench from which men of the Ulster Division attacked on 1 July 1916, the first day of the Battle of the Somme, has been excavated by archaeologists and the results are fascinating. 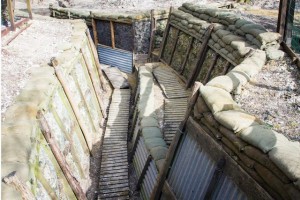 Visiting Thiepval Wood gives our guests an opportunity to see a section of front line  trench as it would have appeared in 1916, together with dugouts, a sap, a mortar position and a communication trench. Dug in chalk, the trenches have been restored using materials which would have been used in 1916, evidence of which was still clear to archaeologists.

One of the most fascinating aspects of the excavations in Thiepval Wood has been the mass of artefacts uncovered. One of the most unusual was a skeleton of a horse, buried by French troops who manned the line here in 1914 and 1915. Also found were gas cylinders from 1916, still full of gas and still with the spanners used to release the gas. A full soldier’s pack was found in a dug, complete with ammunition, a razor, shaving soap, and two combs, one for his hair and one for his moustache. One soldier had also clearly been finding some time to read as underneath a groundsheet were the remains of The Adventures of Foo Man Choo.

Perhaps the most memorable stories are those linked to individual soldiers. A spoon with a bullet hole through it was clearly stamped WRR 19982. Number 19982 of the The Duke of Wellington’s (West Riding Regiment) was John W Hatfield. The Duke of Wellington’s Regiment were part of the 49th (West Riding) Division who spent a considerable amount of time in Thiepval Wood in 1916 during the Battle of the Somme. John Hatfield was shot in the leg; after recovering he was transferred to the Labour Corps. Soldiers sometimes kept their spoons tucked into the puttees wrapped around their legs, which perhaps explains the bullet hole. Private Samuel Scott of the Royal Irish Rifles landed in France on 5 October 1915, served with the 9th and 12th Battalions, survived the war and was demobilized at the war’s end. Each soldier carried a button stick with which to protect his uniform while polishing his buttons. Private Scott clearly lost his button stick which  in a trench in Thiepval Wood as it was also uncovered by archaeologists 90 years later.

It is not surprising that Thiepval Wood is always a favourite with guests on tours to the Somme battlefields. 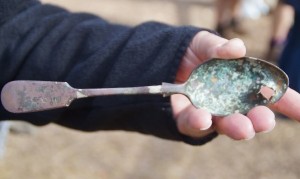