On our D Day Landings guided tour we visit sites important to the invasion on 6th June 1944, including the beautiful American cemetery situated above Omaha beach. On the first day of the battlefield tour we visit Ranville Cemetery, where many British soldiers of the Parachute Regiment who were killed during the first hours of D Day are buried. Amongst the men buried in the cemetery, is a heart-warming story of the courage and devotion between a war dog and his handler. This is possibly the only example of a dog being buried with his handler in any CWGC cemetery which makes this site a particularly poignant stop on our D Day tour.

Private Emile Corteil was from Watford in Hertfordshire and served with A Company, 9th (Essex) Parachute Battalion. Corteil was the dog handler for the company, and his dog was called Glen. Both Emile and Glen parachuted into France with their company on D Day. Many dogs parachuted in with the invasion force to render aid as scouts, guard dogs and also to search out the wounded. 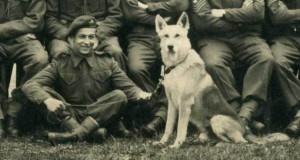 The War Office had begun an experimental dog training school in 1940 after persistent requests by officers and dog trainers. At the end of the First World War, the War Dog School which had trained thousands of dogs was shut down as it was expected that if another war was to break out, technology would have advanced enough to make using dogs superfluous. A Volunteer Trained Dog Reserve was begun in early in the Second World War by those who could see the potential of using dogs, to act as a register of owners and dogs who would, in the event of a national emergency relinquish their dogs.

It is likely that Glen’s role would have been to act as a patrol to search the area around his company and to alert them of enemy soldiers in the area. Dogs like Glen would have their own parachute and when they reached the ground they would be released from the parachute by their handlers, their harness being adjusted for work in the field. 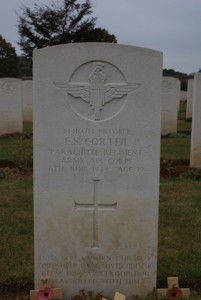 Emile was killed on D Day aged 19 years; Glen was also killed and the two were found lying together. They are both buried and commemorated in the same grave at Ranville Cemetery. The role that animals, but especially that which dogs played in the war effort is sadly, often forgotten. Many of those dogs have no known grave and nowhere fitting for us to commemorate their bravery. However, Glen lies with his master, devoted to his work, where we can remember him.   The inscription on the grave was chosen by his parents. It says:

Had you known our boy you would have loved him too.  Glen his parachute dog was killed  with him.

This is such a special place to visit on our D Day landings tour and a fitting way to commemorate the role of animals, not only in Normandy, but throughout the Second World War