On our World War 1 battlefield tours ‘Chapters from the Western Front’ and ‘Treading in Tommy’s Footsteps’, we will visit the new memorial known as The Ring of Remembrance at Notre Dame de Lorette. When Susan and Steve Cocks visited this memorial on their recent research visit to the battlefield sites, they were taken aback by the enormity of this edifice. This is a new memorial and Susan and Steve were not quite sure what to expect. However, on a bitterly cold morning in early February, they walked through the dark, gloomy entrance tunnel and were amazed to see the winter’s sun shining on the bronze coloured metal sheets that contain the names of 579,606 soldiers from Britain, France, Belgium, Germany and several other countries who fell in the region during The First World War. The effect was breathtaking and emotional. No distinction is made between nationality, rank or religion; all names are listed in alphabetical order and former enemies are remembered side by side. 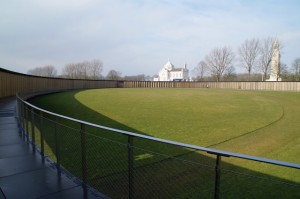 Philippe Prost, the memorial’s architect, described his design and his inspiration in these words; “To give shape to brotherhood, to unite yesterday’s enemies, I chose the ring as a figure to bring together the names of the soldiers, thinking of the circle formed by people holding hands. The ring is synonymous with unity and eternity. Unity, because the names form a sort of human chain, and eternity because the letters are joined without an end, in alphabetical order without any distinction of nationality, rank or religion.”

It is situated on the high point of the hump-backed ridge beside the French monument of Notre Dame de Lorette, the largest French cemetery of World War 1.  The ridge stands 165 metres high and, with Vimy Ridge, utterly dominates the otherwise flat Douai plain and the town of Arras.  Standing here, one can see why these pieces of high ground were fought over so fiercely throughout the war. The French suffered 100,000 casualties  in finally taking the Notre Dame de Lorette Ridge in 1915.

To visit this memorial join us on the appropriate battlefield tour. We do not think you will fail to be moved and humbled as you walk around this Ring of Remembrance to the sacrifice of so many young men from across Europe in The Great War.