The Lost Generation of World War I: The Remarkable Record of Captain Robert Cecil Blackwood MC and his Champion Edinburgh Academy Rugby Team

As we are approaching the climax of the 2013 rugby Six Nations Championship, we reflect on a school rugby team photographed in 1905 – the Champion Edinburgh Academy Rugby team – a team comprising a group of young men in their prime which would be decimated a decade later during the First World War. This story is one of many collected by Guided battlefield Tours during the course of our World War 1 tours.

The idea of a generation of young men lost on the battlefields of the First World War has long been held in popular imagination and has equally been a concept of considerable interest to historians. As Captain Robert Cecil Blackwood looked back after the war, the concept of a lost generation must have seemed very real when he thought about the boys he had known in his youth. His daughter joined our Ypres Remembered battlefield tour and has a fascinating collection of letters and documents relating to his war service, amongst which is this remarkable school photograph. 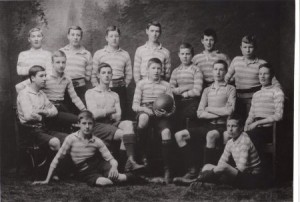 An ex-pupil of Edinburgh Academy and a graduate of Edinburgh University, Robert Blackwood was commissioned into The Royal Scots in September 1914. He served with the 2nd Battalion in Belgium from January to September 1915 and during this time he saw action at some of the most notorious locations of the First World War, including Hill 60 and Hooge. His life was probably saved when he was wounded on 4 September 1915, which resulted in him being absent from the Royal Scots disastrous attack at Hooge on 25 September. He returned home for a period of treatment and recuperation, during which time he was awarded the Military Cross. Captain Blackwood returned to duty in France in April 1917 and after a period of further service in the trenches, he was released by the army in September 1917 to rejoin his old employer to drill for oil in Algeria. He finally saw service in Salonika and the Caucasus and was discharged in September 1919.

In the photograph, we can see Robert Blackwood as a 15-year-old pupil and on the reverse he has listed the name of each boy and their fate during World War 1. Of the fifteen boys who formed the team, eight were killed during the war. Of those surviving, Robert Blackwood was wounded, as very likely were others. The boys had reached their mid-twenties by 1914 and over half lost their lives during the course of the First World War. Inevitably some of the survivors also suffered physical and mental injury.

We follow the footsteps of this close-knit rugby team on several of our tours. We visit Hooge and Hill 60 on our Ypres Remembered tour, Chapters from the Western Front and Treading in Tommy’s Footsteps. Loos and Festubert are on the Forgotten Front tour and for those with a particular interest in the Scottish regiments, we pay tribute to the lost and fallen at the 51st Highland Division Memorial at Beaumont Hamel on our Recalling the Somme tour.