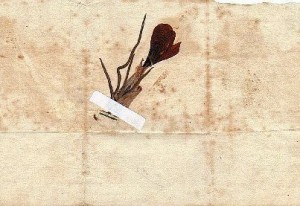 Amongst the waste and devastation of the Western Front in 1917, any small sign of renewal or hope for a return of nature and normality must have been of massive importance to a soldier far away from home. Twenty-two year-old Private Norman Howard Smith, son of Thomas and Augusta, drapers and outfitters, of the 6th Battalion of The King’s Own Shropshire Light Infantry found such a sign in amongst the carnage of Arras and his family have lovingly preserved it to this day. This is undoubtedly one of the most moving stories collected by Guided battlefield Tours during our World War 1 battlefield tours.

In a letter written by the young Private Smith in April 1917, just before the Battle of Arras, from a billet in an old stable, his major concern was for his mother and how she is constantly on “the go” at home. He recounts having heard from his brother, also serving in the army, and seeing other local men in France, and at the end describes attending two services on Easter Monday and taking the sacrament. The most moving part of the letter is where he relates how, on Easter Sunday, he had found a crocus pushing its way through “the rubbish and wreckage of a village”. The symbolism of this must have been quite overwhelming for a young man of religious conviction. He placed the crocus in an envelope with the letter and his daughter showed us this remarkable keepsake when she joined us on our Treading in Tommy’s Footsteps tour.

The military career of Private Smith mirrored that of many young men at the time and his footsteps can be traced in several of our First World War tours. In our Battles of 1917–1918, we visit the site of the Battle of Arras where Private Smith was first wounded in April 1917 along with almost 159,000 other casualties and where he wrote his letter and tucked in the delicate crocus. In our three Ypres tours, Ypres Remembered, Chapters from the Western Front and Treading in Tommy’s Footsteps, we see the areas where Private Smith fought and lost so many of his friends and comrades in the late summer of 1917, during the Battle of Passchendaele. He was most probably injured when his battalion took part in the Battle of Langemark, the second allied general attack of the Third Battle of Ypres.

We visit the cemeteries of Tyne Cot, as well as Langemark, the final resting place for over 44,000 German soldiers, one of only four German cemeteries in Flanders. On all of these tours, we gather at the Last Post ceremony at the Menin Gate and pay tribute to the men and women who were cut down in their prime or injured at the front. The Menin Gate is just a stone’s throw away from the moving and prize-winning In Flanders Field Museum, where we spend an afternoon.