The 17th September 1944 saw the beginning of the largest airborne operation in the history of warfare. This was the beginning of Operation Market Garden, Field Marshall Montgomery’s ambitious plan to break into Germany and end the war by Christmas. As part of this operation over 10,600 British troops of the 1st Airborne Division landed around the town of Oosterbeek by parachute and glider. The overall plan ultimately failed, but the men fought tenaciously against German armoured forces to hold the ground that they had taken and the bridge at Arnhem. On 25 September 2071 survivors were evacuated across the Rhine. We follow the story of this operation on our Battle of Arnhem tour.

We visit a number of the sites at which key events took place, such as the bridges at Grave, Nijmegan and Arnhem. We also visit the moving Oosterbeek cemetery where many of the British Airborne troops who died are buried. One of the most striking memorials which we visit is also at Oosterbeek. 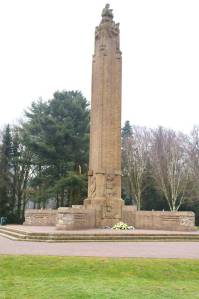 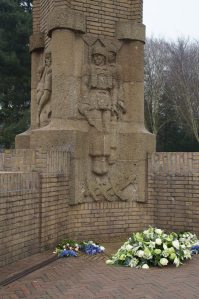 A Panel from the Oosterbeek Airborne Memorial

The airborne memorial at Oosterbeek was erected by local residents to thank and honour the airborne troops who gave their lives in the liberation of Holland. The memorial is surmounted by the figure of liberty. She is surrounded by the figures of civilians and soldiers supporting the other values which are being fought for, Belief, Justice, Home, Hope and Love.

Some of most moving images are on the lower panels of the memorial. One panel depicts soldiers descending by parachute laden with kit and carrying weapons in their hands. Below them other troops are landing by glider. Another panel shows local women caring for the wounded. A woman carries a soldier who has lost his leg.

The airborne memorial at Oosterbeek stands opposite the Hartenstein Airborne Museum.This excellent museum recreates the story of the Arnhem operation and effectively captures the atmosphere of events through its wide range of exhibits, including artefacts, recreated scenes from the local area, film and the personal accounts of soldiers and civilians.