At the junction of the D73 and the D151 in Thiepval village, turn on to the D151, signposted Albert,  and the entrance to the car park is on your left after about 70 yards.

The Thiepval memorial to the missing dominates the local skyline. Towering 45 meters high, it is visible for miles around.  The memorial commemorates more than 72,000 men from Britain, Ireland and South Africa, who lost their lives fighting on the Somme battlefields before 20 March 1918 and who have no known grave.  The majority of the names are from losses during the Somme battles of 1916.

It was designed by Sir Edwin Lutyens, regarded by many as Britain’s greatest 20th Century architect, and was unveiled by Prince Edward, the Prince of Wales, in August 1932.  Its simplicity is appealing yet deceptive.  It is built in red brick and white limestone and consists of a series of arches set at right angles, each of which passes through the structure.  The arches increase in size as the monument rises upwards and the largest arch creates a vast space in which is the Stone of Remembrance is set.  The British Union flag and the French Tricolore fly from its top, signifying the unity of the British and French armies which fought the Somme battle side by side.  This concept is further enhanced by a cemetery with the graves of 300 British soldiers and 300 French soldiers which lies behind the memorial. 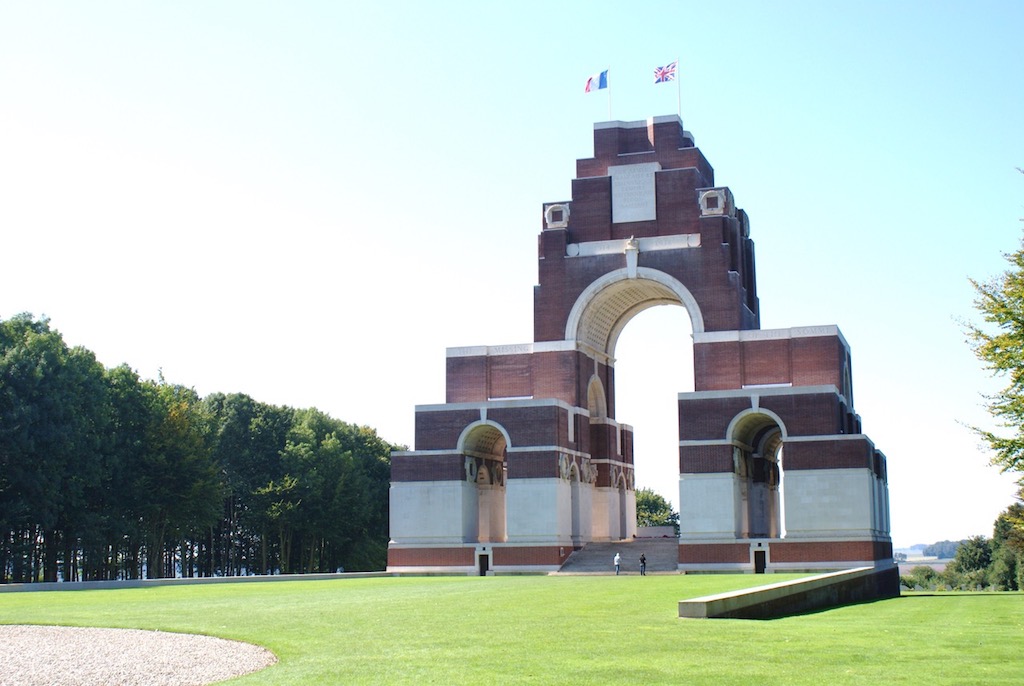 Soldiers Commemorated on the Memorial

We have included some information on four of those listed on the memorial, which perhaps helps to emphasise that these are not just names, but people, each with their own story. The design of the Memorial makes it easy to find the name of a soldier.  Each pier is numbered and each face is given a letter.  There are wall mounted bronze boxes on either side of the steps up to the Memorial in which are volumes containing the names of the soldiers commemorated, listed in alphabetical order. The names on the walls are listed in regiments and in rank order.  So, for example, the composer Lieutenant George Butterworth MC is shown as being commemorated on piers 14A to 15C.  He served in the 13th Battalion Durham Light Infantry and these are the piers and faces on which the men from this regiment are listed.

Lieutenant George Butterworth MC: Pier and Face 14A to 15C

Butterworth showed great courage during July and August 1916. He was mentioned in despatches on 9 July and awarded the Military Cross later in the month for the following:

For conspicuous gallantry in action.  After his captain had been wounded, Butterworth commanded his company with great ability and coolness, and with his energy and utter disregard of danger he set a fine example on the front line.  His name had previously been brought to notice for good and gallant work.

According to the battalion diary, throughout the night of 4/5 August 1916, the battalion was involved in fighting near Pozières.  In the early morning of 5 August, there was shelling, smoke bombs and gunfire which made it difficult to pass messages.  Butterworth was asked to take a bombing party to Munster Trench (he was in Butterworth Trench which his men named after him when they completed its construction on 1 August).  However, he was killed at 4.45am.  Whenever we visit Thiepval and see his name, we think of the beautiful melodic notes of his famous composition ‘The Banks of Green Meadow’.

Rifleman William McFadzean VC  Pier and Face 15A and 15B

Following this, we suggest that you find the name of William Frederick McFadzean VC, Royal Irish Rifles.  Before the war, he was apprenticed in the linen trade.  He was a tall young man, a keen sportsman and played as a junior for the Collegians Rugby Football Club.  He was a member of the Young Citizen Volunteers, the youth section of the East Belfast Regiment of the Ulster Defence Force (UVF), which had been formed to oppose Irish Home Rule.  He enlisted in the Army in September 1914.  This young 20 year old soldier, known as ‘Billy’, was awarded the VC for giving his own life to save the lives of his comrades in Thiepval Wood on 1 July 1916.  His citation reads:

For most conspicuous bravery.  While in a concentration trench and opening a box of bombs[1] for distribution prior to an attack, the box slipped down into a trench, which was crowded with men, and two of the safety pins fell out.  Private McFadzean, instantly recognising the danger to his comrades, with heroic courage threw himself on the top of the bombs.  The bombs exploded blowing him to pieces, but only one other man was injured.  He well knew his danger, being himself a bomber, but without a moment’s hesitation he gave his life for his comrades.

His commanding officer wrote to Billy’s father.  The letter said:

It is with feelings of great pride that I read the announcement of the granting of the VC to your gallant young son and my only regret is that he was not spared to wear his well-earned decoration.  It was one of the finest deeds of a war that is so full of big things and I can assure you that the whole battalion rejoiced when they heard it.  Your gallant boy, though gone from us, his deeds will forever live in our memories and record will go down for all time in the regimental history which he has added fresh and great lustre to. 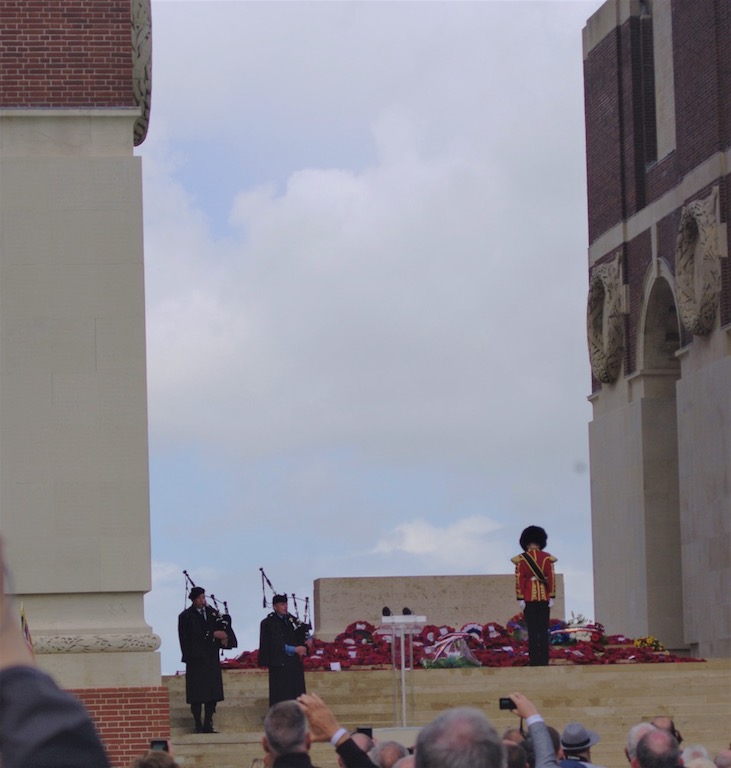 Opposite the Pier on which Billy McFadzean is commemorated, you will see the Pier where the name of Thomas Kettle is inscribed.  He served with the Royal Dublin Fusiliers.  He and Billy came from totally different political backgrounds.  Nonetheless, they fought in the same war.  Kettle was a leading Irish Nationalist.  He was a Member of Parliament for East Tyrone and was also a Professor of Economics at University College Dublin. In 1914, he was alarmed at the rise of the UVF, a private army  led by Edward Carson which opposed self-rule for Ireland.  As a result he became actively involved in the Nationalist movement (the Irish Volunteers) and in July 1914 he went to Belgium to purchase guns.  As war broke out, he stayed to observe events and was shocked at the violent oppression meted upon many Belgians by the German army.  On his return to Ireland, he enlisted in the British Army.  He wrote the poem below just days before his death on 9 September 1916.  It was written for his daughter, Elisabeth, who was born in 1913.  The last lines show his awareness of the ill feeling on the part of many nationalists towards the Irishmen who fought in the British Army.

In wiser days, my darling rosebud, blown
To beauty proud as was your mother's prime,
In that desired, delayed, incredible time,
You'll ask why I abandoned you, my own,
And the dear heart that was your baby throne,
To dice with death. And oh! They’ll give you rhyme
And reason: some will call the thing sublime,
And some decry it in a knowing tone.
So here, while the mad guns curse overhead,
And tired men sigh with mud for couch and floor,
Know that we fools, now with the foolish dead,
Died not for flag, nor King, nor Emperor,
But for a dream, born in a herdsman's shed,
And for the secret Scripture of the poor.

Private Frederick George Souls  Pier and Face 3C to 4A

One spring day in 2019, we were walking in the Cotswolds near Bourton on the Water and came across the little village of Great Rissington. We knew the story of the five Souls brothers from Gloucestershire but did not realise that we were in the village where they had lived.  All five brothers died in WW1; this was the greatest sacrifice by a British family in WW1.   We found it deeply moving to see their five names listed on the memorial in the village church.

Frederick George Souls of the 16th Battalion of the Cheshire Regiment is listed on the Thiepval Memorial.  He died on 19 July 1916 aged 30.  He was not the first brother to die; the youngest of them, Albert, died on 14 March 1916 aged 20.  He was in the Machine Gun Corps and is buried at Bully-Grenay Communal Cemetery.  Later in 1916, Walter Souls died on 2 August aged 24.  He was also in the Machine Gun Corps and was taken to a hospital at Rouen where he died of a blood clot in his leg.  He is buried in St Sever Cemetery.  Two of the brothers were twins and were both in the Cheshire regiment.  They died within days of each other aged 30.  Alfred died on 20 April 1918 and Arthur, who had been awarded the MM, died five days later.  Their mother left the village with the youngest son who was too young to be conscripted but he died of meningitis.  After the death of the third brother, Prime Minister Herbert Asquith wrote to Mrs Souls conveying ‘the sympathy of theKing and Queen for Mrs Souls in her great sorrow.’  Asquith himself had suffered the loss of a loved one.  His eldest son, Raymond, a distinguished barrister, enlisted in 1915 and was killed by a bullet in the chest in September 1916. 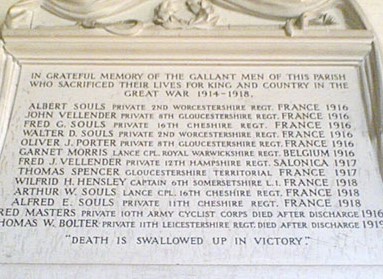 Sometimes on tour we have been asked, “Who are the missing”. Essentially these are men who have no known grave. Many of the men on the memorial would have originally had a grave, which was destroyed in later fighting. Many others are the soldiers whose bodies could not be identified and were buried as “Known unto God”; these make up a large part of many cemeteries. The names of others on the memorial are of men who completely disappeared or still lay out on the battlefield. The remains of soldiers continue to be discovered.

Inevitably, the remains of some of those listed on the memorial were later discovered and it was originally the practice to remove these names. This practice no longer takes place, unless the whole stone section from the memorial is being replaced. The panel below originally also showed the name of John Ross from Bonnyrigg, Midlothian. He served in the 8th Royal Scots and was killed on 22 July 1916. His remains were later identified and he is buried in Flat Iron Copse Cemetery. 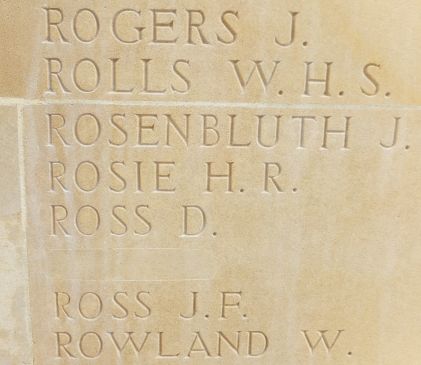 An amended panel from the Memorial