On our centenary battlefield tour, Ypres Remembered, we will remember the men who died during The Second Battle of Ypres.  It was at Ypres that the Germans first used gas on the Western Front.  The Canadian Corps are remembered at Vancouver Corner for holding the line when a major breach in the French and British lines caused a crisis amongst the allies.  After the enormous losses suffered by the BEF during 1914, Territorial Regiments, among them the Monmouthshires, arrived on the Western Front.  Both the 1st and 3rd Monmouthshires were quickly brought up into the trenches in the Ypres Salient followed by the 2nd Monmouthshires at the beginning of May and they fought tenaciously during these dramatic weeks. The 1st Monmouthshires faced overwhelming odds when reinforcements failed to arrive at the Frezenberg Ridge on 8 May.   Led by Captain Harold Thorne Edwards, D company tried desperately to hold back the Germans and fought to almost the last man.  When called upon to surrender, Captain Edwards famously shouted, ‘Surrender be Damned’.  The incident has been immortalised in a painting by Fred Roe which hangs in the reception at Newport Civic Centre, South Wales.  He was originally buried by the German army but after the war, he was re-buried in New Irish Farm Cemetery. 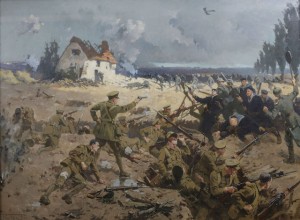 Surrender be Damned by Fred Roe

Another powerful account of the battle was told by Rifleman Dai Jones in a letter to the foreman of the Newport Docks where many he and many other men in his company had worked.  He relates how the bombardment was so severe that ‘they blew in every parapet along the trench’.   The Adjutant called out, ‘The Germans are charging and have got into the farm on the right.  Who’ll volunteer for a charge and drive them back?’  He described that his platoon from B Company ‘sprang forward’ and, despite the fact that the Adjutant was killed immediately, they ‘kept on … [and] made the charge’. He states in his letter that the regiment they were supporting had been gassed, were almost blind and could not help.  Hopelessly outnumbered, they ‘held on with that pluck that always shows a British soldier.’ Eventually they retired on receiving the order ‘every man for himself’, leaving their dead and wounded behind.  He tells how Jack Lawrence was left in the trenches dying of his wounds.  However, Jack was taken prisoner and, unable to fight again, was repatriated after spending some time as a POW.  The picture below which includes both Jack and Dai was sent to us by Jack’s son along with copies of his letters from the POW camp. 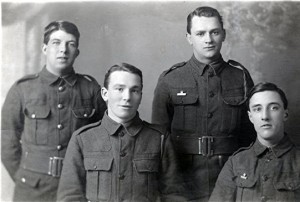 The Monmouthshires fought with courage and gained praise from their own commanding officers as well as Divisional officers.  Their casualties were such that Captain Steel of 3rd Monmouthshires wrote to the South Wales Argus to say the heavy losses made it impossible for him to write to every family ‘partly because the losses have been so severe, and partly because it is difficult to trace all cases’.  Casualties reduced the 1st Battalion to just 11 officers and 218 other ranks, the 2nd Battalion 19 officers and 580 other ranks and the 3rd Battalion 11 officers and 250 other ranks.  The three battalions were withdrawn from the lines and, on 27 May 1915, they were amalgamated into one Battalion.  Thanks to the courage and sacrifice of the men who fought on the Ypres battlefields in the Spring of 1915, the town of Ypres was saved. 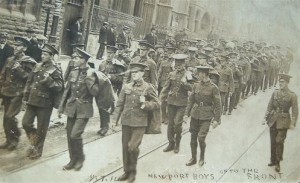 The Monmouths leave for war 1914