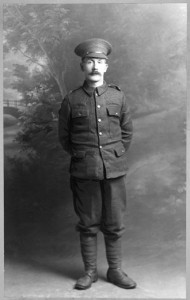 “I am a tunneller, I must look after the others first.”

Tunnelling as a form of warfare really came into its own during the First World War. The evidence of mining is still very obvious, such as the massive crater at La Boisselle, which we visit on our Somme battlefield tours, and at Hill 60, which we visit on our Ypres battlefield tours. On many of our World War 1 tours we explore the areas where tunnelling played such a vital part in the battles and pay tribute to the men who risked, and sometimes lost their lives, in the pursuit of mining underneath no man’s land.

Sapper William Hackett was one of these brave men and here is his story.

Born on 11th June 1873 in Nottingham, William Hackett worked as a miner for 23 years in the Nottingham and Yorkshire coalfields. When the First World War broke out, he was already in his early forties and, after being rejected three times by the York and Lancaster Regiment for being too old (he had also been diagnosed with a heart condition), he enlisted in the 254th Tunnelling Company, Corps of Royal Engineers in October 1915.

Just under a year later, a few weeks after his 43rd birthday in June 1916, Sapper Hackett was tragically killed at Shaftesbury Avenue Mine, near Givenchy-lès-la-Bassée, France. Sapper Hackett died several days after a German attack in which he and four tunnellers were left entombed in the mines they had been digging. Rescuers managed to dig a hole to release the men, three of whom made their way to safety. Rather than leaving his young injured comrade Thomas Collins, Sapper Hackett insisted on staying, saying ‘I am a tunneller and must look after the others first’. The two of them stayed there for four days as rescuers endeavoured to reach the injured Collins. Tragically, the tunnel and shaft collapsed and they both died. For this act of selfless courage Sapper Hackett was awarded the Victoria Cross; he was the only tunneller to receive this honour during World War 1.

For most conspicuous bravery when entombed with four others in a gallery owing to the explosion of an enemy mine. After working for 20 hours, a hole was made through fallen earth and broken timber, and the outside party was met. Sapper Hackett helped three of the men through the hole and could easily have followed, but refused to leave the fourth, who had been seriously injured, saying,”I am a tunneller, I must look after the others first.” Meantime, the hole was getting smaller, yet he still refused to leave his injured comrade. Finally, the gallery collapsed, and though the rescue party worked desperately for four days the attempt to reach the two men failed. Sapper Hackett well knowing the nature of sliding earth, the chances against him, deliberately gave his life for his comrade.

When speaking several years later about her husband’s heroism, his wife Alice said: ‘I could never understand the doctors rejecting him on account of his heart. There wasn’t much wrong with that, was there?’

We visit Sapper Hackett’s final resting place on our Forgotten Front tour. A monument faces across a field and by looking though the cut out “T” one can see the piece of ground below which he still lies. He is also commemorated on the Ploegsteert Memorial to the Missing near Ypres in Belgium. His Victoria Cross is displayed at the Royal Engineers Museum (Chatham, England).