Our World War 1 battlefield tours to Ypres often visit Bedford House cemetery. One of the graves found here is that of Private Thomas Samuel Henry Peaceful, the inspiration for the popular novel by War Horse author, Michael Morpurgos, which was also adapted as a popular stage play and film. In the novel Private, Tommo Peaceful is a country boy who joins up underage to fight in World War 1 with his elder brother Charlie. Tommo is wounded in an attack on the German lines and his brother, who stops to help him, is charged with cowardice and executed.

The novel Private Peaceful very much conforms to the popularly held image of World War 1 of underage soldiers, firing squads and incompetent officers. Inevitably the true story of Private Peaceful is very different. Underage soldiers are uncommon in the World War 1 Commonwealth War Graves Commission cemeteries in France and Belgium and such soldiers were regularly discharged from the army on their true age being discovered. Nor was the army as ready to shoot its own men as is often portrayed. There were around 3000 British soldiers condemned to death out of over eight million who served, but 90% of these were commuted to imprisonment.

The real life Thomas Peaceful was from Battersea, London and was born in 1893. He was the second of five brothers and one 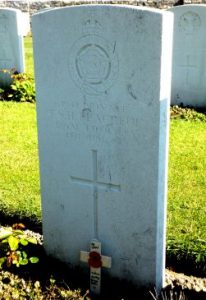 sister and before the war worked as a van boy. He was the son of Thomas and Matilda Peaceful, who were also born in London, though their parents had originated from Essex. Father Thomas is described on the 1911 census return as a medical tube glass maker. Younger Thomas was a soldier before the war, joining the Special Reserve of the Royal Fusiliers. The Special Reserve provided six months training, followed by three to four weeks training per year. Like The Territorial Army, the Special Reserve provided an opportunity for part time soldiering, which was attractive to many young men in an era when holidays away were not a possibility for most working families. In time of war, Special Reservists provided drafts to reinforce regular battalions of the regiment.

Thomas landed in France and joined the 4th Battalion of the Royal Fusiliers at Ypres in Belgium. The Battalion had been in France and Belgium from the beginning of the war, and by the end of 1914 had fought in The Battle of Mons, The Battle of Le Cateau, The Battle of the Marne, The Battle of the Aisne and The First Battle of Ypres. The battalion was in need of regular drafts and Thomas Peaceful arrived as part of a draft, landing in France on 11 November 1914. At the beginning of June Thomas Peaceful’s battalion were resting in huts behind the lines near Ypres and on 3 June moved into the trenches near Hooge on the Menin Road. This was a very active sector and the British lines suffered from constant sniping and “whizz bangs”. Private Peaceful was wounded, evacuated behind the lines and died on 4 June aged 21. He was originally buried in the Asylum Cemetery to the West of Ypres and his body was moved to Bedford House Cemetery in the concentration of cemeteries which followed the war