We visit the moving Pheasant Wood Cemetery at Fromelles on our tour ‘The Forgotten Front’. This cemetery is the first new war cemetery built by the Commonwealth War Graves Commission in 50 years.

After the Battle of Fromelles on 19 July 1916, many of the dead Australian and British soldiers were buried in mass graves by the Germans. Based on Red Cross records and some records in the Bavarian regimental archives, the location of several of these mass graves was discovered close to a wood, known as Pheasant Wood to the British during World War 1. In May 2009, excavations took place and the trial trenches exposed the skeletal remains which were preserved in the positions in which the bodies had been buried. The bodies of 250 soldiers were recovered. Many of these men were identified through DNA. Relations of the missing from the battle took part in these DNA tests to ensure that names were given to as many of the bodies.

The remains of these comrades were buried during 2010; no more than 30 remains of the soldiers were buried on any one day. This ensured that each burial was carried out with respect and reverence by army chaplains and burial parties from both the Australian and British Armed Forces. The final burial of an unknown soldier took place on 19 July 2010, exactly 94 years after the attack in which the men died. This took place in the presence of HRH The Prince of Wales and was attended by many from Britain and Australia whose relatives had died during this battle of the First World War. The Duke of Kent, speaking at the ceremony, said, ‘It is right and fitting that these men, who were comrades, Allies and even two brothers, lie side by side in this beautiful cemetery. They are lost no longer, are here at last at peace.’ During the service, extracts were read from the letters the soldiers had written home. The soldier’s coffin was carried by both British and Australian soldiers while a joint Firing Party fired three shots. Following this, there was a one minute silence. The land for the cemetery was donated by the villagers of Fromelles and, on 19 July 2010, they lined the streets to join the relatives in remembering the young men who died 70 years ago.

A new visitor’s centre is due to open on 18 July 2014. Our tour ‘The Forgotten Front’ is on 19-21 July. If the building goes to schedule we will be able to see the displays which will tell the story of the recovery of the lost soldiers 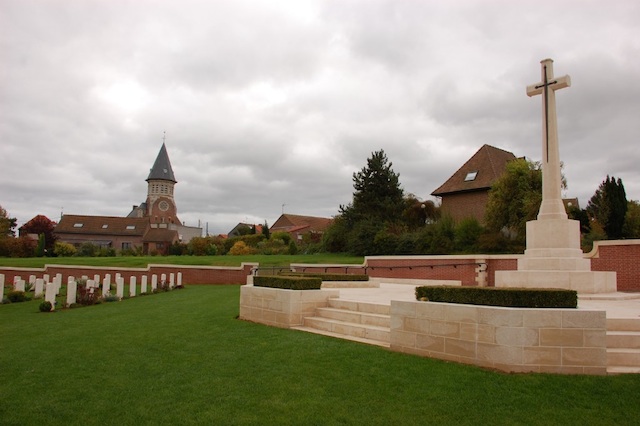