All of our clients are special to us. They share the same deep interest in the history of the two world wars that we have, and every one of them can recount wonderful stories of family members, friends and acquaintances who experienced and participated in the 1914–1918 and 1939–1945 conflicts. We are always very pleased when a client books to come on a second, and even third battlefield tour, sometimes exploring the same era which first attracted them to Guided Battlefield Tours and more often than not, joining a tour from another time.

Pete Furness is one such client and we are delighted that he will be joining us for his fifth tour this year. Pete, who is from Aberdeen and works in the oil industry, has a wealth of stories to tell about his family and their involvement in the two world wars and in this blog, we would very much like to share some of the stories he has told us.

The Furness family and the First World War

In the First World War, Pete’s great grandfather, Private John Furness, was wounded serving with the Durham Light Infantry. He was told that his legs would have to be amputated. He refused and went on to play for Crook Town FC. Pete visited the Somme where his great grandfather’s battalion served on our Chapters from the Western Front tour. 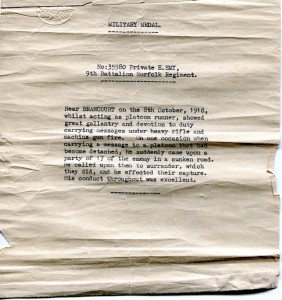 Another great grandfather, Edward Smy, was awarded the Military Medal in 1918. He carried messages to the front line under heavy fire and while carrying one message, captured 17 prisoners single handedly. Pete joined our Battles of 1917–1918 tour and we took Pete to the site at Brancourt where his great grandfather won the medal. Pete still has the letter which came with the medal from General Rawlinson, commander of the 5th British Army.

The Furness family and the Second World War 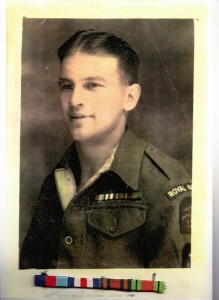 On his first tour taken with us, D-Day and the Normandy Landings, we learned that Pete’s grandfather, John Hall, was a Royal Navy Commando and member of the Beach Party on Juno Beach. The Beach Master on Juno was Commander Maude, who was played by the inimitable Kenneth More in the 1962 film The Longest Day. Pete’s great grandfather was his wireless operator, who can be seen behind Kenneth More in the film!

In addition to his D-Day connections, Pete had another grandfather who served in the RAF with Stanley Matthews and a grandmother, Dorothy Furness, who served in the WAAFS at Bletchley Park. If you have not been to Bletchley Park, it is truly a wonderful living museum and is a great day out for all the family. You can find out more here www.bletchleypark.org.uk

We are happy that Pete retrned this year with his father to join our Walking the Somme tour and we look forward to hearing more stories about their family. If you have any tales you would like to share, we would be delighted to hear from you. As we approach the centenary of the beginning of the First World War and the seventieth anniversary of the D-Day Landings, we are really keen to post blogs so we can keep the memories and stories of all of the brave men and women who took part in the two world conflicts alive. For more details do please contact us here info@guidedbattlefieldtours.co.uk