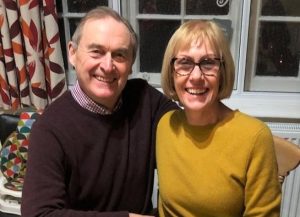 Guided Battlefield Tours is owned by Steve and Susan Cocks. We operated Group coach tours and private tours to World War 1 and World War 2 sites in France, Belgium and Holland from 2008 until 2021. During this period we led over 200 tours. Our clients came from around the world, including Australia, Canada, New Zealand, South Africa and the USA. Our battlefield tours were inspired by a passion for history and a deep appreciation of the sacrifice of past generations.

Steve is a History graduate and was Head of History before he became a secondary school Headteacher. He has a long-standing interest in the First World War, in which his grandfather served for four years, and a passion for twentieth century history and the Second World War, in which his uncle served in the RAF and was awarded the DFC. He has led tours to the battlefields for over 20 years and uses his in-depth knowledge of the history of the 1st and 2nd World Wars to bring the sites to life. Steve is a badged member of the Guild of Battlefield Guides.

Susan studied both History and English at university and has worked as a Head of English and Assistant Headteacher. She achieved an MA in First World War Studies with Birmingham University and has a deep interest in the poetry and literature of The Great War. Susan is an Associated Member of the Guild of Battlefield Guides.