On our battlefield tour ‘The Forgotten Front’, we visit the much neglected area around Neuve Chapelle.  We see the battlefield sites of the 1915 battles of Neuve Chapelle and Auber Ridge as well as Fromelles, the site of a diversionary attack during The Battle of the Somme in 1916.  This area also bore much of the ferocious German assault during Operation Georgette in April 1918. 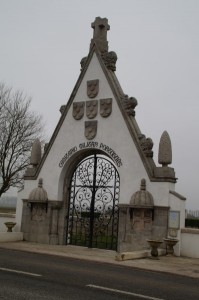 In the area of these battlefields, we visit three memorials and cemeteries that are not visited often: Le Touret Memorial, the Indian Memorial and the Portuguese Memorial.  Portugal became involved in The First World War in 1916.  Their first troops arrived at the trenches on the Western Front in May 1917.  A new government then came to power in Portugal which did not support the country’s involvement in the war. Conditions for Portugese soldiers in France deteriorated rapidly. They were starved of resources and support, were poorly equipped and were given no leave. They had no respite from the harsh realities of attrition in trench warfare and morale fell dramatically.  By April the threat of mutiny within the Portuguese Expedionary Force was taken seriously and it was agreed that they would be taken out of the line.  However, before this could happen, on 9 April the Germans launched Operation Georgette, the second of their great Spring offensives. The Allied lines were pounded by artillery and lethal gas shells.  Faced with eight German Division, the greatly outnumbered and exhausted Portuguese troops were not able to hold their positions.

Two battalions of Portugese soldiers initially stood firm along with 50th Northumbrians and the 51st Highlanders but they were overwhelmed and forced to retreat.  Anibal Milhais stayed behind with his machine gun ‘Louisa’ and covered the retreat and so allowed them to regroup.   Eventually, his ammunition ran out and he managed to hide in enemy held territory for three days.  He rescued a Scottish doctor from drowning in a swamp and together they returned to the British lines where the doctor informed everyone of Private Milhais’ courage.  His commanding officer called him ‘Soldado Milhoes’ a soldier worth a million men and henceforth he was known as ‘The Million Man’; he received the highest Portuguese military decoration, the Order of Tower and Sword of Valour, Loyalty and Merit.  His village was renamed after him and died there in 1970.