On our battlefield tours Ypres Remembered and Chapters from the Western Front, we often visit Lijssenthoek Military Cemetery.  The first burials in this cemetery were in May 1915 when the French Army took over the ‘Ferme Remi’ as an Evacuation Hospital and named it after the late farmer Remi Quaghebeur.  By June 1915, the British Army established a number Casualty Clearing Stations around the farm.  Railway facilities were rapidly expanded to enable the wounded to be moved to Base Hospitals where necessary and was known as Remy Sidings.  The French left the site the following year and Remy Sidings became the biggest hospital site in the Ypres Salient.  During the Spring Offensive in 1918, the Casualty Clearing Stations were evacuated and Field Ambulances were located here instead.  During the First World War, around 300,000 patients were treated at the Casualty Clearing Stations and it is estimated that 97% of them survived. 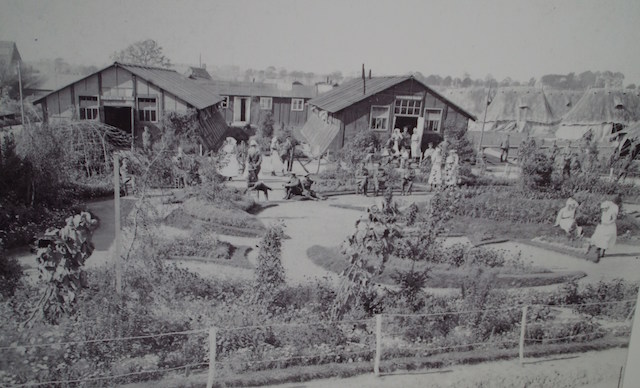 Soldiers and Nurses at Lijssenthoek

As Remy Sidings expanded into a village, wooden passageways between the tents and barracks and the gravel driveways were given street names.  Trees and bushes were planted, a generator provided power, and there was a water purification plant and an incinerator.   The staffing level grew and there were 50 staff tents.  In 1917, vegetable gardens were developed with competitions for the most productive garden; the most amazing statistic available is that of a pumpkin weighing 11 kilos!  The staff and patients were often treated to concerts and battalion bands to raise morale.

The First World War saw massive developments in medical treatment.  Much of this was developed by doctors practicing at the Front.  At Remy Sidings, Lawrence Robertson carried out research into the use of blood transfusions in 1916 and this became normal practise for the British Army.  Another surgeon experimented with saline drips in 1917 and in 1918 a team of doctors carried out research into methods of suturing wounds.  These experiments were crucial to the improvement in care of the wounded.

Despite being behind the lines, the Casualty Clearing Stations at Remy Sidings were not always safe havens and occasionally it was attacked.  On the evening of 17 August 1917, enemy planes flew over and dropped bombs.  This raid left 24 dead, including 10 German prisoners of war, and 42 injured.  There is a further attack a few days later on 21 August and a young British nurse, Nellie Spindler who was at the nearby Brandhoek Casualty Clearing Station, was hit in the back by shrapnel and died within 15 minutes.  Aged 26, she was staff nurse with Queen Alexandra’s Imperial Military Nursing Service. She was buried with full military honours and is the only woman buried at Lijssenthoek Military Cemetery. 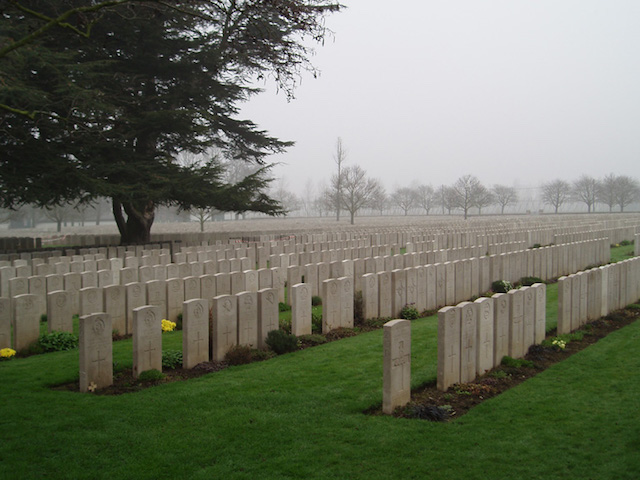 Lijssenthoek Military Cemetery is the second largest cemetery in the Ypres Salient with 10,784 graves.  Out of these burials, 4,000 took place during The Third Battle of Ypres, often known as the Battle of Passchendaele, although only the final phase of the battle was to take the village of Passchendaele.  At the end of World War One, there were 11,250 graves but many graves of French and American soldiers were exhumed and reburied elsewhere and so there are often gaps between the graves.  This is particularly noticeable in the American section after 53 bodies were transferred to Waregem and 67 repatriated to America.  Two graves were left at the request of their families who felt it would be wrong to disturb their bodies.  The third American grave was exhumed from another cemetery and repatriated at Lijssenthoek at the request of his mother.  Her other son had served with the British Army and was buried there and her wish was for the two brothers to be reunited.

In most British Military Cemeteries, there is no distinction between ranks.  Generals and Privates are buried side by side.  It is sometimes different in cemeteries attached to hospitals; the officers were in separate wards and sometimes are buried in separate plots.  However, at Lijssenthoek the graves in first row of each plot are those of officers who were buried in coffins.  Therefore, there is a bigger gap between the graves.  Other ranks are wrapped in blankets and so buried closer together.  This distinction ended in late August 1917.  Lt Ronald Ross Douglas was the first officer to be buried amongst the troop and he lies between two privates in plot 18, row C, grave 11.