We stay in Ypres on our battlefield tours Ypres Remembered and Chapters from the Western Front and visit the town on our tours Treading in Tommy’s Footsteps and Battles of 1917-1918. The beautiful historic square forms the heart of the town and this is where you will find the magnificent Cloth Hall, which was at one time the largest secular building in Europe. This building dates back to 1304 and was financed by the merchant’s guilds. At this time, Ypres was a bustling town of some 40,000 inhabitants, whose prosperity was built upon the manufacture of woollen cloth. Ypres has stood in the way of many armies over the centuries and became a fortified town from the Middle Ages. Some impressive sections of the fortifications built in the 17th century remain today, including an original entrance to the town through the Lille gate. 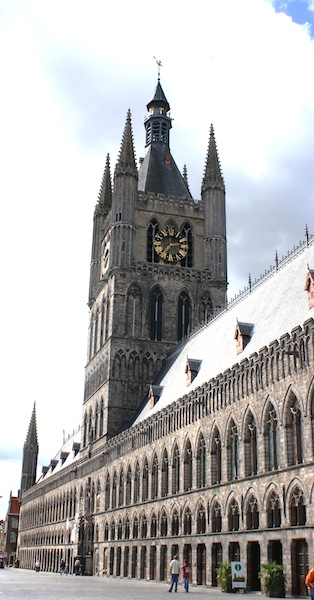 Ypres’ buildings retained their beauty and grandeur until artillery destroyed the town early in The First World War when it stood in the path of the German troops in 1914 during the “Race to the Sea.” The town became a symbol of great importance and the British defence of the town and the Ypres Salient has become legendary. After the war, plans were made to rebuild the town in the elegance of its heyday. Finished in the 1960s, the Cloth Hall now houses the In Flanders Field Museum. We visit this museum on three of our World War 1 battlefield tours. When you stand in the square with a picture of the old town in your hand, you will see that it appears virtually identical to the original buildings. Indeed, the restaurant Den Anker, which nestles beside the Cloth Hall, can readily by identified in an original picture of British troops entering the town for the first time in October 1914.

Behind the Cloth Hall lies St Martin’s Cathedral. The original building had stood since the 13th 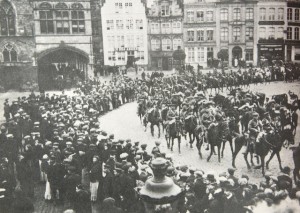 Century but like the Cloth Hall was destroyed by artillery. In August 1915, since much of the building was still standing, many soldiers found shelter within its walls. However, on 12th August, enemy guns found the exact range and a direct hit buried a group of men from The Duke of Cornwalls Light Infantry under fallen masonry. The shelling continued for around five hours and many men who were attempting to rescue their comrades were injured and buried under the rubble themselves. Despite this, efforts to rescue the soldiers continued. The casualties over that summer morning were 20 killed and 21 injured. After the war, as the cathedral was reconstructed the remains of a number of soldiers from The Great War were discovered in the ruins. These men are now buried in the town’s Reservoir Cemetery. 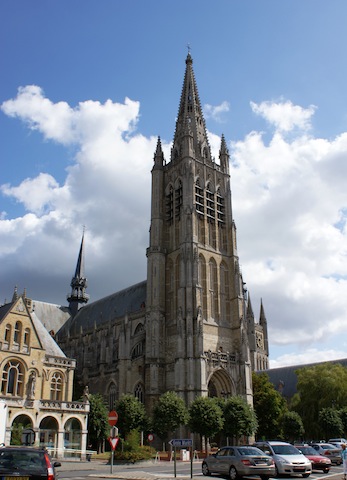