On our battlefield tour ‘Walking the Ypres Salient’, we walk some of the most fiercely fought over battlefields of the First World War.  As we walk across this ground where so many men lost their lives, it becomes so clear why both sides were determined to hold their position against all odds.  Earlier this year on a cold, clear frosty morning, we began one of our walks at Hill 62 near Sanctuary Wood.   There is a Canadian Memorial commemorating the action by the Canadians in the Summer of 1916.  Following a violent enemy attack in June, the Canadian counter-attack regained the lost ground.   Standing here, we look over at Mount Kemmel, Hill 60 and Ypres itself and we are able to appreciate the strategic importance of this vantage point at Hill 62 and understand why it was essential to regain this area.

A walk through Sanctuary Wood takes us to Hooge and the site of the terrifying Flammenwerfer attack in July 1915 which resulted in heavy British losses.    The walk along the path beside the Hooge Café brings us to Railway Wood.  It is amazing to look across towards Ypres and see the roads which converge on Hell Fire Corner which is often regarded as the most notorious place in the Ypres Salient.  The Menin Road and the Zillebeke-Potijze Road could be seen clearly and we could all see how essential it was to control this high ground.  Looking down from this position, we think of the famous picture of Hell Fire Corner where a soldier is taking his horses through at the gallop in the hope of avoiding the inevitable shells that he knew would be fired as soon as he was spotted. 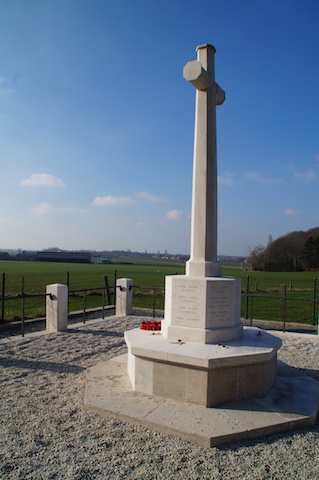 Although the remains of the dugouts in Railway Wood have disappeared, the many shell holes are visible as well as the remains of the craters caused by the mines which were exploded around this area.  It is a solemn reminder of the many young men, both British and German, who lost their lives in the continuous mining operations here.  There is a lone cross which commemorates the grave of eighth Royal Engineers from the 177th Tunnelling Company and four attached infantry who lost their lives here between 1915-1917and whose bodies were not recovered.  Close to the RE Grave there is a memorial to the Liverpool Scottish Battalion who suffered high losses on 16 June 1915 as they attacked from the Menin Road.  At the end of the day there were 79 dead, 109 missing and 212 wounded.  It is a moving site worthy of a moment of reflection and remembrance.  During this action, an army doctor with the Liverpool Scottish repeatedly went into no man’s land for nearly 48 hours until he was satisfied there were no more wounded who needed treatment. His name is Noel Chavasse and he was awarded the Military Cross for these heroic efforts during the battle.  In 1916 he was awarded the Victoria Cross (VC) for similar actions in treating wounded men.  He again risked his life continuously during battle in 1917 and subsequently died of wounds received.  He was again awarded the VC and is the only person to have received two VCs during the war.  He is buried in Brandhoek New Military Cemetery, Ypres.