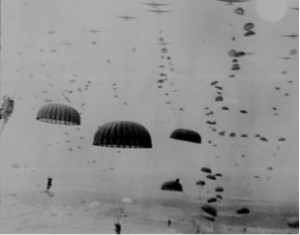 After the defeat of the German forces in Normandy in August 1944, German forces had withdrawn towards eastern France, Belgium, Holland and the German border. In the north, the First Canadian Army and British Second Army were advancing through Belgium and Holland, while to the south, four American armies were driving towards the German border through France. However, the whole Allied advance began to face major difficulties, particularly in relation to supply. By the beginning of September 1944, the Allies still only had use of one deep water port, Cherbourg, with German defenders still holding out in ports such as Dunkirk. In addition to this, a large part of the French rail network had been destroyed by Allied bombing in preparation for D Day. In an effort to overcome the problem, the Allies organised “The Red Ball Express”, a massive operation to supply Allied armies by road. However, this became more and more difficult as the Allies advanced and by the end of August it took five tons of fuel to deliver one ton of supplies to the troops at the front. German resistance also began to stiffen and German forces prepared to halt the Allied advance at the line of powerful defences along the German border, known as The Siegfried Line. 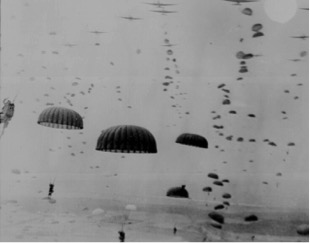 The Allied Supreme Commander, General Dwight D Eisenhower favoured pursuing the defeated German armies across France, Belgium and Holland on a broad front. The British and Canadian drive towards the key German industrial area of the Ruhr was given additional supplies, but Eisenhower also wanted to continue the drive towards the River Rhine and Germany by American armies in the south, particularly General Patten’s Third Army. Montgomery argued strenuously against a broad front strategy. Supplies to his armies were still inadequate and meant that it would not be possible to reach the Ruhr. Capturing the Ruhr would cripple the German war effort and make it unlikely that Germany could continue to fight. Montgomery, therefore, wanted his armies to receive priority in terms of supply to allow an Allied thrust across a much narrower front in the north towards the Ruhr.

Montgomery proposed an ambitious plan to advance into the north of Germany, which would pass around the northern end of The Siegfried Line and potentially end the war by the end of 1944. He also argued that such an advance was necessary to capture the V2 sites which were being used to attack London. After a dramatic meeting with Montgomery, Eisenhower agreed to the plan and to give it a higher priority for supplies, though the broad front advance was to continue.

The plan was essentially to seize a crossing over the Lower Rhine at Arnhem which would allow Allied armies to enter northern Germany. There were six major water obstacles between the British forces in Belgium and the northern side of the Lower Rhine. These obstacles were the Wilhelmina Canal at Son, the Zuid-Willemsvaart Canal at Veguel, the Maas River at Grave, the Maas-Waal Canal and the Waal River at Nijmegen and the Lower Rhine at Arnhem. These crossings were to be seized by airborne troops, landing by parachute and glider. Capturing these crossings would allow the British XXX Corps, commanded by Lieutenant -General Brian Horrocks, to speed the 62 miles to Arnhem within four days at the latest, relieve the British 1st Airborne Division and establish a bridgehead across the Lower Rhine.

Four airborne divisions of nearly 35, 000 men were to be landed, 20,000 by parachute and 15,000 by glider. The US 101st Airborne Division would land around Son and Eindhoven, the US 82nd around Grave and Nijmegen and the British 1st Airborne Division and Polish 1st Independent Parachute Brigade would land around Arnhem and Oosterbeek. It was also essential that these troops captured high ground at Groesbeek and to the north-west of Arnhem. In addition, it was necessary to drop over 1700 vehicles, 260 artillery pieces and over 3000 tons of ammunition. Nearly 1300 American and 480 British aircraft were to be used in the airlift. However, the number of aircraft available only made it possible to lift 60% of the force in one operation and so it was decided to land the airborne troops over two days.

German forces in France and Belgium had been in full retreat towards the German border since the end of August. However, by early September this began to change. As the momentum of the Allied advance was reduced due to supply problems, the Germans began to reorganise their defences in the West. Field Marshall Gerd von Rundstedt was called out of retirement and began to put a defensive line in place from Antwerp to the Siegfried Line. Airborne troops, the remnants of infantry divisions, stragglers, marines, SS units and a range of other units were sent to Holland and Belgium to hold this line. The 9th and 10th Panzer Divisions were also sent to the Nijmegen- Arnhem area, where they were to rest and refit in order to provide an armoured reserve.

Monitoring of German communications by Bletchley Park, aerial photographs and reports by the Dutch resistance all identified the movement of German armoured units to the area. However, these reports were dismissed by Browning and Montgomery.

The landings on 17 September were successful and carried out with light losses. The great majority of airborne troops also landed in their drop zones and were not scattered, as had occurred in previous operations. The 101st American airborne Division met little resistance and soon captured four of the bridges assigned to them. Only the bridge at Son was destroyed by the Germans before it could be taken. The 82nd American Airborne Division took the Grave Bridge and the bridge at Heumen. The division also took the high ground around Groesbeek. However, it failed to take the bridge at Nijmegen, which was a major setback.

The 1st British Airborne Division landed successfully around Oosterbeek, but only half the division arrived on day one and half of those available were needed to defend the landing zone, which greatly reduced the force available to capture the bridge at Arnhem, which was eight miles away. Three battalions of the Parachute Regiment set off for the bridge in jeeps, but soon met German resistance. Only the 2nd Battalion, commanded by Lieutenant-Colonel John Frost reached the bridge, taking its northern end. Attempts to capture the southern end failed. A further major problem arose when it was realised that the division’s radio sets did not work.

At 14.15, 300 guns opened a rolling artillery barrage and at 14.35 the tanks and infantry of the Irish Guards moved off to spearhead the advance to Arnhem. The Guards crossed the Meuse-Escaut Canal into Holland, but were attacked by German anti-tank units. These were overcome with the assistance of RAF Typhoons and the town of Valkenswaard was reached by evening, though the plan has already fallen behind schedule.

Bad weather resulted in the second phase of the airlift being delayed. The airlift was eventually completed, but major problems continued to present themselves. The pattern of landings made the intention of the operation obvious to the Germans, which was confirmed when they found plans on the body of an American officer. Defenders reacted quickly and the Allied troops soon faced determined resistance.

Attempts to relieve Frost’s men on Arnhem Bridge failed and both of the US airborne divisions faced counter attacks. The Guards Armoured Division reached Eindhoven, but had faced attacks by German infantry and tanks. There was also now a delay while a Bailey bridge was erected across the Wilhelmina Canal at Son.

Approximately 600 men, most from the 2nd Parachute Regiment, were still holding the Northern end of the Arnhem Bridge. The Germans began to systematically destroy the buildings within the area occupied by the British, using mortars, artillery and tanks. Two attempts to reach the bridge by troops from the 1st Airborne Division were beaten off with heavy losses. It was realised that any further attempt to reach the men at the Arnhem Bridge would be futile and attention now focused on attempting to create a defensive perimeter around Oosterbeek. 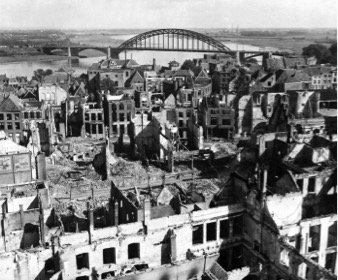 Frost’s men managed to establish communication with the 1st Airborne Division using the local telephone system, to learn that airborne troops had no hope of reaching them and that XXX Corps had been stopped at Nijmegen. A truce was made and wounded, including Frost, were passed to the Germans as prisoners. The remaining defenders were now fighting on in isolated groups with ammunition, water and medical supplies virtually exhausted. By midday resistance was at an end. The 1st Airborne Division were also in a struggle for survival , facing constant attacks and desperately attempting to keep open a route to the river, which was their only means of escape.

bank was held by the Germans and there was no means of crossing. To make matters worse, their supplies were dropped on the other side of the river.

Continuing to face heavy German attacks, the 1st Division attempted to hide preparations for withdrawal. Covered by Polish paratroopers, the evacuation across the Rhine began at 10.00pm. By the next morning nearly 2400 men had been evacuated, leaving 300 men to surrender on the northern bank. Of the original 10600 men of the 1st Airborne Division who had landed, 1500 had been killed and 6400 taken prisoner.

There has been some debate in relation to casualties, but overall casualties on the Allied side were between 15000 and 17000. German casualties were probably between 6000 and 9000. There were also 500 Dutch civilian casualties.

Why Did Operation Market Garden Fail?

The overall plan was highly ambitious and its success required that a whole range of factors would work in the Allies’ favour. Amongst other things, it was assumed that German resistance would be light, that the weather would be favourable and that all of the bridges would be captured intact. Historians have debated the reasons for the failure of the operation at length and there is divided opinion over which reasons were of the greatest importance: