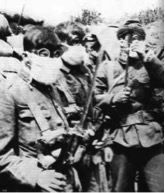 The British Army in France and Belgium in 1915

The year began with considerable optimism on the part of the British and French; German plans for a quick victory in 1914 had failed, Germany was now facing a war on two fronts and British forces on the Western Front were increasing rapidly. The tour visits the sites of three battles from this year. 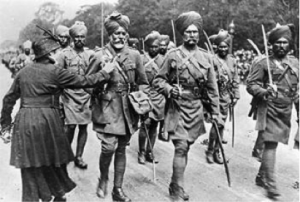 As the year opened, Britain and France planned a joint offensive. A French attack on Vimy Ridge and a British attack against Neuve Chapelle were intended to dislodge the German hold on the important rail and road junction of La Bassée. However, a shortage of French troops resulted in solely a British attack on La Bassée. Britain was anxious to play an active role in the war and to show the offensive capability of the BEF, which now comprised of two armies. This was Britain’s first planned major offensive operation of the war. Responsibility for carrying out the attack fell to the commander of the First Army, Sir Douglas Haig.

Planning for the battle was carried out in great detail and set the pattern for such operations for the rest of the war, including intelligence gathering via aerial observation, the production of detailed trench maps, the production of detailed artillery fire plans and the careful registering of guns. Haig held hopes of a breach in the German lines which would allow the seizure of the Aubers Ridge, perhaps even an advance in the direction of Lille, and a cavalry brigade was held in reserve to exploit any such opportunity.

British and Indian infantry attacked at 8.05am on 10 March after a powerful 35 minute artillery bombardment. Overall the initial attack went well and by the end of the day the German line had been taken to a depth of 1200 yards along a 4000 yard front. Haig was disappointed that the Aubers Ridge had not been taken and ordered continued attacks the next day, which met with virtually no success. The Germans launched a major counterattack on 12 March and, though this was repulsed, it became clear that there were no prospects of further gains and Haig brought the battle to an end. Total British casualties were 13,000, of which about one third were dead, and German casualties were a similar figure.

The battle was important as it showed that with proper preparation, it was possible to take sections of the enemy’s defensive line and established a pattern of planning and preparation for future offensives. However, it also demonstrated the difficulty of completely breaching the enemy line and the high cost of attempting to do so. Importantly, the battle demonstrated the key role of artillery.

Much of the thinking that eventually led to the development of more effective tactics resulted from Neuve Chapelle, but inevitably not all of those involved drew the same conclusions.

The Second Battle of Ypres

The Second Battle of Ypres

On 22nd April 1915, the Germans launched another assault against the town of Ypres. On the morning of the attack, French colonial troops saw a haze of green mist moving towards them. This was the first use gas on the Western Front. As the cloud of chlorine gas drifted over their trenches, the defenders, defenceless and choking, ran creating a gap in the defences around Ypres over

four miles wide. Canadian troops were rushed forward into the gap and after desperate fighting managed to halt the German advance. German attacks continued into May and some of the most desperate fighting of the war took place at places such as Hill 60, The Caterpillar and Frezenberg Ridge, as British forces attempted to hold back German attacks. By the end of the battle, the British defenders had been pushed into a tighter ring around Ypres and the Germans had gained more important high ground, but Ypres had not fallen.

As with Neuve Chapelle, the Battle of Aubers Ridge was planned as part of a joint Franco- British offensive. The French were to launch a major offensive in the Champagne region and an attack on Vimy Ridge. This was to be supported by a British attack in the north, again by Haig’s First Army. It was decided that the attack would be another attempt to capture the Aubers Ridge. British forces in France and Belgium had continued to grow and the operation was to be on a scale far larger than that at Neuve Chapelle. The village of Aubers and the ridge of high ground to which it gave its name were to be attacked in a pincer operation. The British IV Corps formed the northern jaw of the pincer and the Indian Corps formed the jaw to the South.

A greater force of both infantry and artillery was available than at Neuve Chapelle, but the scale of the attack was much greater and the German defences were far more formidable. Following Neuve Chapelle, the Germans had greatly increased their defences, increasing the lines of trenches while also making them deeper. Underground dugouts had been constructed to shelter troops, fortified strongpoints or redoubts had been created and artillery significantly increased. To compound these difficulties, artillery shells were in limited supply as a result of the Dardanelles campaign and the Second Battle of Ypres, both of which had also begun in April.

The infantry attack took place at 5.40am on 9 May, after a 40 minute artillery bombardment. The attackers everywhere were met by a hail of machine gun and rifle fire and the attack soon failed along virtually the whole front. Haig drove to the headquarters of each of his corps commanders and ordered that the attacks continue, but attempts to continue the attack after another bombardment produced a similar results and the German artillery subjected the British lines to heavy shellfire. Plans to bring up fresh troops to continue the attacks the following day ended when German shelling and the chaos in communication trenches prevented them from moving up. Further attacks were abandoned, but the cost of the operation had been over 10,000 casualties, a quarter of whom had been killed, with no gain whatsoever.

The Battle of Aubers Ridge is often best remembered by the political storm which resulted from the commander of the BEF, Sir John French, leaking details of the shortage of shells to the press. Criticism of the conduct of the war had been mounting with the lack of any progress in the Dardanelles and the “shell scandal” resulted in the fall of the Liberal government and the formation of a new coalition.

Two further British attacks at Festubert and Givenchy in May and June 1915 respectively had resulted in no gains, but political pressure on Sir John French to mount an operation in support of the French increased. The BEF was nearly a million men strong by the summer and the war was not going well for the Allies, particularly in the East where the Russians were suffering major defeats. Responsibility was again assigned to Haig’s First Army and he was ordered to prepare for an attack between La Bassée and Lens, in support of renewed French attacks against Vimy and in the Champagne region.

The sector of the British attack, in front of the mining village of Loos, was ill suited to offensive operations and there was still a shortage of artillery ammunition, but Haig’s protests were overruled. He reluctantly agreed to an attack if he was given permission to use gas. The British attack, which eventually took place on 25 September, was the largest of the war so far involving six divisions on a front over six miles long. Two New Army divisions made up of Kitchener volunteers were also held in reserve, together with cavalry.

Despite the lack of a strong breeze, the gas was released at 5.50am and the infantry attack began at 6.30am. In the North of the attack, the gas hardly moved and caused considerable casualties amongst the attacking troops. Here the attacks failed, but elsewhere there were some notable successes. The Hohenzollern Redoubt was captured, as was the village of Loos and in places the first two German lines were taken. Buoyed up by these successes, Haig ordered the two reserve divisions forward, but their attack on the 26 September was disastrous. Attacks continued into early November, but the successes of the first day were never repeated and German counter attacks took back a number of the early gains.

The cost of Loos in casualties was 50,000 of whom 6,000 were dead and 16,000 were missing. As with Aubers Ridge, the main outcome of the battle was political. Criticism of Sir John French’s conduct of the war had been mounting and criticism of his conduct over Loos, fuelled by Haig, who became his successor, resulted in French’s removal by the end of the year.