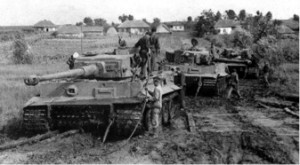 In many respects, the D Day landings on 6 June 1944 were a major success. The Allies had launched the greatest amphibious military operation in history and taken the Germans by surprise. A series of bridgeheads had been secured along the Normandy coast across a front of over 30 miles and over 100,000 troops were landed. Rommel had predicted that once ashore, the Allies would not be dislodged and this proved to be correct. However, many of the first day objectives had not been achived. There had been a failure to join up the bridgeheads and a gap of seven miles existed between the British and Americans. The bridgehead at Omaha was also very shallow. The greatest failure in the British sector was that Caen had not been taken. Beyond Caen a plateau runs South to Falaise, between the Rivers Orne and Dive. Capturing this would isolate the German 7th Army in Normandy and open up the route for an Allied advance towards the River Seine. To make any progress out of the Eastern sector of the Allied bridgehead, Caen would have to taken or by-passed and this dominated British strategy during June and July. In the West, the priority for the Americans was to secure the port of Cherbourg. A major port was essential in order to allow the Allies to build up their forces to a sufficient size to begin the liberation of Western Europe.

The Opposing Forces in Normandy
Two Allied armies were landed in Normandy in June; the British Second Army and the American First Army. By August, the First Canadian Army and the Third American Army had also been landed. These Allied armies faced the German 7th Army. Once ashore, the broad Allied strategy was to establish a firm bridgehead in Normandy, to secure Brittany with its major ports and then advance the Allied front to the River Seine. This was to be achieved in 90 days. Following this Allied troops would push on to the German border. The Allies held major advantages. They possessed almost complete control of the air and a massive superiority in resources. German commanders were also still convinced that a second Allied landing would be made in the Pas de Calais and continued to hold major units back to meet this attack. The Allies had broken German communication codes, enabling them to predict troop movements and operations. Added to all of this was Hitler’s constant interference in operations, greatly hampering his generals’ ability to organise a realistic strategy.

However, despite Allied advantages, German forces fought tenaciously to contain the Allies and prevent a breakout from Normandy. In this they were assisted by the geography of Normandy. The nature of the “bocage” countryside, which was comprised of small fields, enclosed by earth banks and hedges, proved ideal for defence. Many German weapons were greatly superior to those used by the Allies, such as the Tiger tank and the highly effective 88mm gun. Much of the strength of the German army, however, lay in its training and motivation. The German 7th Army in Normandy generally proved to be highly effective, adaptable and well led at all levels. The battle for Normandy lasted for two and a half months and the eventual Allied breakout was only achieved at the cost of heavy casualties on all sides. Allied casualties were almost 240,000 killed, wounded or missing, while German casualties were 200,000, plus 200,000 Germans taken prisoner of war.

Montgomery
In January 1944, General Bernard Montgomery returned to Britain from Italy and was appointed the Commander of 21st Army Group, under the Allied Supreme Commander, General Eisenhower. In effect Montgomery was the commander of all of the Allied ground forces in Normandy. He inherited a plan for the invasion of France, but reshaped this to strengthen and widen the front of the attack and protect its flanks with airborne assaults, which were undoubtedly major factors in the success of D Day. During the Normandy campaign, which followed the D Day landings, the British effectively held down the bulk of German forces, including the great majority of the panzer (armoured) divisions, giving the Americans the opportunity to break out of Normandy in the West. This breakout then allowed the Allies to defeat German forces in Normandy and encircle the German Seventh Army in the “Falaise Pocket”. The Allies were on the Seine within 90 days and Paris was liberated on 25 August.

Montgomery’s later account of events claimed that the conduct of the Normandy campaign was as originally envisaged by him and was conducted according to his original plan. However, his role in the battle for Normandy has been the subject of enormous controversy. Many of Montgomery’s critics have been American, but there have also been critics in Britain, including leading figures during the war. For his critics, Montgomery was too cautious and allowed British forces to be bogged down around Caen. His later claims are seen as an attempt to make the best of what actually transpired. Critics claim that his original plans called for a much more aggressive strategy, penetrating deep into German held territory and that a breakthrough could have been achieved by British forces with a bolder strategy. Although the German Seventh Army was largely destroyed in Normandy, his critics also blame Montgomery’s indecisiveness for allowing a large part of it to escape.

The Course of Events

8 June:  The Allied beaches were linked from Sword to Omaha. A counter-attack by the 12th Panzer Division on the Canadians between Caen and Bayeux failed.

9 June:  The British attempted to envelop Caen from the South East through Tilly-sur-Seulles.

10- 14 June:  The Villers-Bocage operation. The British broke off from Tilly-sur-Seulles and the 7th Armoured Division (The Desert Rats) attempted to swing South East of Caen through Villers-Bocage. The British passed through the town to the high ground beyond, but the attack came to a halt on 13 June when the 22nd Brigade of the 7th Division was ambushed by tanks of The Panzer Lehr Division. They lost 25 tanks, 28 other tracked vehicles and many casualties. The Germans retook Villers-Bocage which was then destroyed by RAF bombers.

The Allied Normandy campaign now became bogged down in the bocage with the British stalled in front of Caen and Tilly-sur Seulles and the Americans in front of Saint Lo.

19 June:  A major storm wrecked the Allied artificial harbour on Omaha beach and badly damaged the artificial harbour at Arromanches. The Allied build of forces and supplies was severely disrupted and offensive plans were put on hold. The Germans used this pause to reorganise their defences.

26 June- 1 July:  The British began Operation Epsom in an attempt to cross the River Odon, take Hill 112 and cross the River Orne south of Caen. The attack was led by the 15th Scottish Division, supported by the 11th Armoured Division. Fighting in the bocage country proved to be very difficult and costly. Hill 112 was temporarily taken, but was then evacuated in the face of German counter attacks by four panzer divisions. By the end of the operation, a bridgehead had been established over the Odon, but the River Orne had not been reached. However, an important outcome of Epsom was that the Germans had been forced to commit their reserve panzer divisions. The damage these suffered meant that it was not now possible for the Germans to launch their planned counter-attack.

6- 9 July:  Operation Charnwood began with a massive bomber raid on Caen and resulted in the Canadians taking the northern half of the town.

12 July:  The Americans took Saint Lo, opening up the route to the West and South.

18- 20 July:  The British launched Operation Goodwood. Three armoured divisions attacked to the East of Caen in the biggest tank assault of the Normandy campaign. Initial plans to achieve a breakout towards Falaise were scaled down, but objectives of the battle were to complete the capture of Caen and occupy the Bourguébus Ridge to the South of the city. The Germans had prepared defences in depth, utilising farms and villages with excellent fields of fire across the open countryside between them. The British attack stalled on day one and when it was brought to a halt by heavy rain, the capture of Caen had been completed and a foothold had been gained on the Bourgébus Ridge.

The attack cost the British 5,500 casualties and 400 tanks. The Germans had halted the attack, but strategically the battle had enormously important consequences. The route South of Caen towards Falaise had been opened, making the German position in Normandy untenable. German losses had also removed any possibility of a counter-attack. The battle had also tied down German panzer divisions preventing them from opposing the planned American operation to end the deadlock in the West.

25July- 1 August:  The Americans launched Operation Cobra. This attack broke through the German defences in the West and opened up the route to the South.

3 August:  Patton’s Third American Army broke out to take Brittany and made a drive South through Le Mans towards the Seine.

6- 13 August:  Hitler insisted that Von Kluge launch a counter-attack at Mortain in an attempt to cut off Patton’s Third Army. This failed with heavy German losses. An important consequence of the German attack was to take the German Seventh Army further to the West, pushing it deeper into a pocket surrounded by the Allies.

8- 11 August:  The Canadian First Army launched Operation Totalise which aimed to push down the Caen- Falaise Road towards the town of Falaise. The opening stages of the attack saw good progress, but this slowed down in the face of German counter-attacks. This push towards Falaise was continued on 14 August.

8- 21 August:  After consultation with Eisenhower, Montgomery now ordered an operation to encircle the German Seventh Army in what became known as the “Falaise Pocket”. The Eastern base of the pocket was formed by the British, the Northern side by the Canadians and the Southern side by the American First and Third Armies. The Canadians and the 1st Polish Armoured Division, which was part of the Canadian First Army, drove to the South and the Americans pushed North in order to close the exit from the “pocket”. The Poles and the Americans met at Chambois on 19 August. The German Seventh Army commander, Hausser, ordered a withdrawal and launched a series of counter-attacks in order to keep the exit routes open. The Poles who held the dominating position of Hill 262 were the focus of many of these attacks. Finally, on 21 August the pocket was closed, which brought the battle for Normandy to an end.

As German troops were pushed into a smaller and smaller area, they were pounded with incessant artillery fire and subjected to continuous air attacks. Estimates of German losses vary, but some 50,000 Germans were trapped and taken prisoner and over 10,000 were killed. Dealing with the vast number of wounded placed massive pressure on Allied resources. Approximately 40,000 Germans escaped, but the German 7th Army had effectively ceased to exist. The scenes of death and destruction were unparallelled. The battlefield was strewn with thousands of dead men and horses, wrecked tanks and vehicles and abandoned equipment, choking roads and creating a major health hazard.

A debate has continued over the length of time taken to close the pocket, which allowed large numbers to escape. Montgomery has been criticised for his failure to reinforce the Canadians and Poles, while the American commander of land forces, Bradley, has also been criticised for halting Patton’s drive on Chambois. In reality the Allied jaws of the “pocket” responsible for closing the exit were in vulnerable extended positions and were facing aggressive German attacks.

Omar Bradley (U.S. First Army Commander and later commander of all the US ground forces in France) 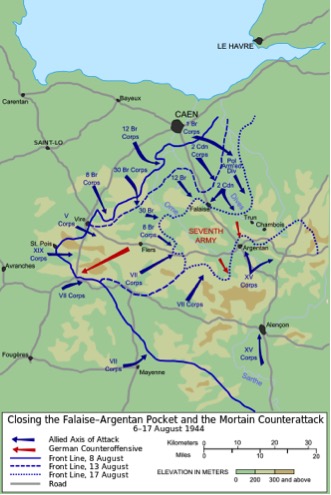