The Christmas Truce of 1914 has captured the imagination of generations of people and visiting the site is one of the highlights of our Forgotten Front battlefield tour. It was one of the most poignant episodes from the First World War1. Bruce Bairnsfather, the famous World War 1 cartoonist and creator of Old Bill, actually took part in the truce and made the drawing below. He marked the spot on a map where he says that he met ‘Fearful Fritz’ and ‘Hateful Henrich’ in a waterlogged turnip field. We visit the exact spot on our Forgotten Front tour and on our Ypres Centenary tour. 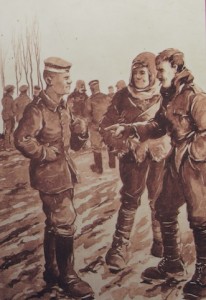 There were in fact several truces; our battlefield tours visit the site of the most famous near Ploegsteert or Plugstreet as it was known to the Tommies. There had been intense fighting in this area during October and November 1914, but by Christmas the war had developed into the stalemate of trench warfare. As Christmas approached incidents occurred when soldiers sang carols and shouted greetings across no man’s land. On Christmas Eve German soldiers in some sectors began to place candles along their trenches and erect Christmas trees. On Christmas Day some soldiers began to venture into no man’s land and soon there were groups of men meeting and exchanging greetings and gifts of schnapps, chocolates, cigarettes and souvenirs, such as buttons from their uniforms. 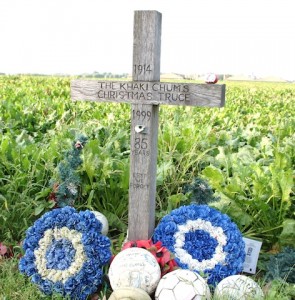 There were reports of football matches, but an opportunity was also taken to deal with more serious matters, such as burying the dead. One of the most curious sights which Bairnsfather recorded was one of his machine gunners, who had been a barber in civilian life, cutting a German’s hair.