As we approach the seventieth anniversary of the D Day landings (2014), the city of Caen is gearing up for the commemoration of this momentous event. We stay in this fascinating city on our ‘Normandy and the D Day Landings’ tour in August and our ‘Battle for Normandy’ tour.

Caen was chosen by William the Conqueror for the site of his principal residence and it soon became the most important town in medieval Normandy. It was from here that William plotted the invasion of England. Caen castle is an imposing structure and a major restoration project has returned the castle to its former glory. The two magnificent medieval abbeys have also been restored. 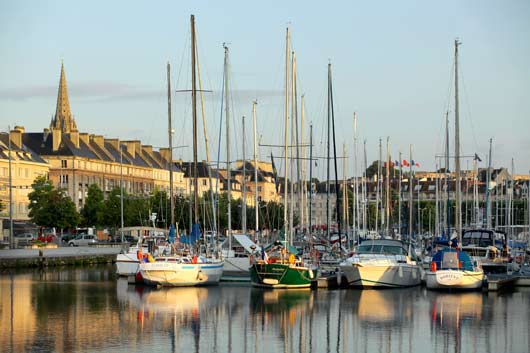 We stay in this fascinating city on our ‘Normandy and the D Day Landings’ tour in August and our ‘Battle for Normandy’ tour.

Looking at Caen in the 21st century, with its modern, wide avenues, new apartment buildings and beautiful marina surrounded by restaurants, it is very hard to imagine the city as it was towards the end of the Second World War. Our hotel on the edge of the marina is an excellent location from which to enjoy the city in the evening. As you will see on our Normandy and the D Day Landings tour and the Battle for Normandy tour, Caen today is a very different place to what it was in 1944, when over three-quarters of the city (almost 10,000 buildings) was destroyed.

Caen was an objective of the British 3rd division on D Day, though it was not taken. On our Battle for Normandy tour, we focus on the operations conducted by the British and Canadian armies and examine the strategic importance of Caen in the fighting between June and August 1944. We also move further afield to Bayeux and the Battle of Normandy museum, Villers Bccage where almost an entire armoured column was destroyed, and then to the small town of Tilly-sur-Seules which changed hands thirteen times. We follow the route of Operation Goodwood which sought to destroy the German defences astride the Caen-Falaise road and the towns and villages which became of vital importance during August 1944 when the British, Canadian and the Polish 1st Armoured Division linked up with the American Forces coming up from the South, finally sealing the fate of German forces in Normandy.