One of our favourite places which we visit on the very last day of our four-day First World War tour Chapters from the Western Front based in Ypres is Talbot House, a haven of tranquillity and reflection after the sights, stories and experiences of the previous few days.

Founded in 1915 in Poperinge, also known as “Pops” by the British troops in the First World War, the house quickly earned itself a position of high importance in the history of the time as a place of R & R. The man who first saw the property and its potential usefulness was Army Chaplain, the Reverend Philip “Tubby” Clayton and it soon became a place where soldiers could meet and relax regardless of rank as they passed to and from the front. It became an Every-Man’s Club with the sign above the door, “All rank abandon, ye who enter here”. 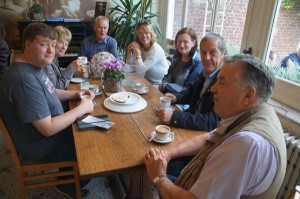 Today, Talbot House is open to visitors. There is a fascinating museum, which as well as showing what life was like in Poperinge at the time for the soldiers and inhabitants alike, also explains the role of the Chinese Labour corps, an aspect of First World War history which is often overlooked. Visitors are treated to a fascinating slide show explaining the background of Talbot House and a film re-enacting an evening of Troops’ musical entertainment, followed by tea and cake being offered by the hard-working volunteers, just as it would have been almost one hundred years ago where there was “always a pot of tea on the go”.

Visitors can take a walk in the beautiful gardens and imagine what it must have been like as a soldier coming back from the Ypres battles. We always ask if any of our guests on the tour play the piano – and are often pleasantly surprised, with the party bursting into a good old First World War song around the original piano in the dining room! 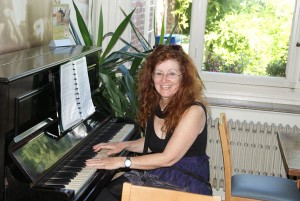 The stories that come from Talbot House are truly touching and memorable and it is here where you can see the first instance of the Facebook “Wall” (we will check with Mark Zuckerberg if this is where he drew inspiration!). Soldiers would put messages on a board (on the wall) requesting information about friends and family members also fighting in the area and one of the most moving stories we hear is of a young man who is trying to find his brother. He writes his message on the board asking for his brother’s whereabouts and the brother is located and brought back from the front to Talbot House for a brief visit. They meet each other again for what is to be last time as one of them is killed a week later in the bitter fighting.

We visit nowhere else quite like Talbot House on our World War 1 battlefield tours. You can find more information about the house here http://www.talbothouse.be/en/bb/home and follow their exploits on Facebook https://www.facebook.com/pages/Talbot-House-Every-mans-club/350430228306697