On our First World War battlefield tours, Recalling the Somme, perhaps some of the most iconic images are the many pictures of the young men waiting to leave their trenches on 1 July 1916, the first day of The Battle of the Somme. These young men began to flock to the colours from Tuesday, 4 August 1914 as the population realised that war with Germany was about to be a reality. Monday 3 August had been a bank holiday and when the recruiting officer arrived at the recruiting office in Great Scotland Yard, he was unable to enter the building because of the great mass of volunteers who surrounded the building waiting to enlist. It took some time for the police to force a gap in the crowd to allow him to enter! 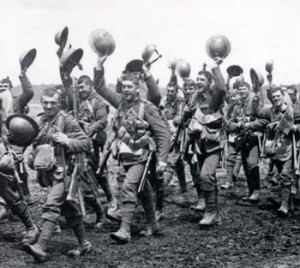 On the following day, 5 August, Lord Kitchener, a national hero, was persuaded to become Secretary of State for War. He was an inspirational and influential character who is remembered today for his iconic recruiting poster. Throughout September the recruiting offices across the land were overwhelmed by the numbers of volunteers. Kitchener actively supported the formation of Pals Battalions and when the Times wrote about the Retreat from Mons after Le Cateau and reported that the British Expeditionary Force had ‘suffered terrible losses’, there was a huge surge in recruitment.

Although they were not professional soldiers, the Pals developed a strong ‘esprit de corps’. They had been friends in civilian life, they trained together, shared common hardships and regarded themselves as equal to the Regulars and Territorials. For many of them, the 1 July 1916, was their first experience of battle. The first Pals who went over the top at 7.30 may well have been afraid but there was the hope of victory. For the waves of men who followed, there can have been few illusions. They had seen their chums fall to the ground as the German shelling began and the machine-guns spat their bullets out with vengeance. Even so, despite knowing full well the dangers they faced, they all did their duty. In his book The First Day of the Somme, Martin Middlebrook tells us, ‘there is no record of any Battalion 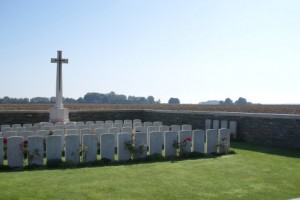 hesitating in its attack’. Was it the army discipline or was the comradeship inspired by the formation of the Pals? We cannot know the answer.

The Accrington Pals at Serre suffered 585 casualties. Private Bloor related how he became trapped in a shell hole. Convinced that he would die, he wanted revenge for his fallen comrades first and took aim at any Germans who came within the sights of his rifle. The Leeds Pals suffered 525 casualties. Private Pearson said of his chums, “The name of Serre and the date of 1st July is engraved deep in our hearts,

along with the faces of our ‘Pals’, a grand crowd of chaps. We were two years in the making and ten minutes in the destroying.” We visit Serre on Recalling the Somme and Walking the Somme Battlefields. To stand on the British front line and look at the line of cemeteries along No Man’s Land is a moving experience that is never forgotten.

There was success in some areas, but as we all know, for many it was a disaster. With almost 60,000 casualties, 19,240 of whom were dead, the end of the day was sombre. For those who were observers, watching their pals mown down in front of their eyes was an appalling experience and Lance Corporal Bury of the Accrington Pals said, ‘I felt sick at the sight of this carnage and remember weeping’. On our tours to the Somme battlefields, we tell the stories of the men who fought and remember their courage and their sacrifice.