The strategic and historical importance of Arras in both the First and Second World Wars can never be underplayed and it is for this very reason that we base ourselves in and explore the town and its surrounding areas in five of our First World War battlefield tours: Recalling the Somme, Treading in Tommy’s Footsteps, the Battles of 1917–1918, Walking the Somme and Poets at War tour. 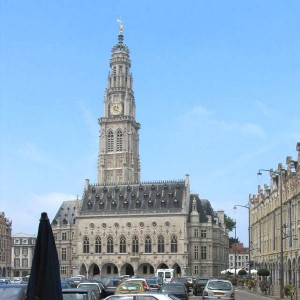 Architecturally, Arras is known for its traditional cobblestone streets and two great squares, the Grand Place and Place des Héros, which both have a beautiful collection of Flemish baroque facades and array of local and international eateries. The Hôtel de Ville (Town Hall) on the Place des Héros was destroyed during the First World War but has been recreated in its original style with its dominating belfry offering a striking view of the city of Arras.

During our WW1 tours, we explore Arras in the context of its strategic position in the First World War, the town being near the front and where a series of battles were fought around the city itself and Vimy Ridge. From March 1916, Arras became a British garrison town and a series of medieval tunnels beneath the city, linked and greatly expanded by the New Zealand Tunnelling Company to accommodate troops, became home to the headquarters and hospital. These tunnels were a decisive factor in the British forces holding the city during the Great War. They were also of great importance during the preparation for the Battle of Arras in April 1917. The city, however, was heavily damaged and had to be rebuilt after the war.

A moving testimony to the British and Commonwealth soldiers who were killed between Spring of 1916 and 7 August 1918, the eve of the Advance to Victory, can be seen at the Arras Memorial. The memorial, designed by Sir Edwin Lutyens and with sculpture by Sir William Reid Dick, commemorates almost 35,000 servicemen with no known grave from the United Kingdom, South Africa and New Zealand and who died in the Arras Sector.