In this centenary year of the outbreak of World War One, our visits to the Somme, Ypres and Mons take on a deeper meaning and on each tour, we mark the bravery and loss of those who took part in the theatre of war with our own two minutes of reflection. This year, our tour ‘Armistice Day in Ypres’ will have a special poignancy as we commemorate the outbreak of war and the heavy losses suffered by the Old Contemptibles during the Retreat from Mons and the First Battle of Ypres. 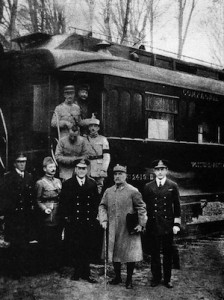 The Allied Representatives at the Singing of the Armistice, 11 November 1918

The Armistice between the Allies and Germany – known initially as the Armistice of Compiègne after the location where it was signed just outside of Paris – was the agreement that ended the fighting in the most bloody conflict the world had ever seen. It went into effect on the eleventh hour of the eleventh day of the eleventh month of 1918, and marked a victory for the Allies and a complete defeat for Germany, although not technically a surrender.

The idea of Armistice Day was specifically dedicated by King George V on 7 November 1919 as a day of remembrance for members of the armed forces who were killed during World War I. The first commemoration was held at Buckingham Palace with the King hosting a banquet in honour of the President of the French Republic during the evening hours of 10 November 1919 followed by the first official Armistice Day held on the grounds of Buckingham Palace on the morning of 11 November 1919.

The two minutes silence was proposed to British statesman Lord Milner by South African politician Sir Percy Fitzpatrick in 1919 and this solemn moment of reflection soon became part of commemorations throughout the world.

There were many moving accounts of the first two minutes silence and this article in the Manchester Guardian on 12 November 1919 is a poignant example.

The first stroke of eleven produced a magical effect.

The tram cars glided into stillness, motors ceased to cough and fume, and stopped dead, and the mighty-limbed dray horses hunched back upon their loads and stopped also, seeming to do it of their own volition.

Someone took off his hat, and with a nervous hesitancy the rest of the men bowed their heads also. Here and there an old soldier could be detected slipping unconsciously into the posture of ‘attention’. An elderly 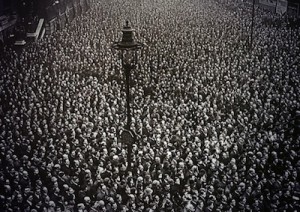 woman, not far away, wiped her eyes, and the man beside her looked white and stern. Everyone stood very still … The hush deepened. It had spread over the whole city and become so pronounced as to impress one with a sense of audibility. It was a silence which was almost pain … And the spirit of memory brooded over it all.”

Armistice Day throughout the World

Armistice Day has been adopted by many countries throughout the world (with the exception of the Netherlands, Denmark and Norway as these countries were neutral during the First World War) and is often a national holiday, Many countries changed the name of the commemoration after the Second World War to honour veterans of that war and subsequent conflicts. In the US, the name has become Veterans Day and in most Commonwealth states, the name Remembrance Day has been adopted. Whatever the name, the day is still marked with the respect and solemnity it deserves.