On our last battlefield tour of 2014, we were in the centre of Ypres at 11am on 11 November.  It was a memorable experience to witness the Remembrance ceremony in the town that was, 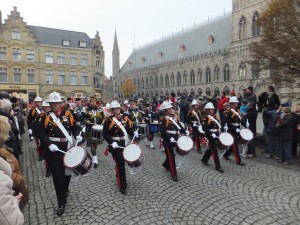 in ‘The Wipers Times’, described as the home of the British soldier ‘who lived in its mighty rampart caverns’.   The majestic, medieval Cloth Hall which dominates the square would have appeared just as it does today to the soldiers who first arrived there in the early days of World War One.

Soon after 10am the bands, the British Legion flags, the multitude of people who wished to lay wreaths, all began to assemble by St Martins Cathedral.  There were representatives from the Police Force, the Sikh community, the Fire Brigade, the Belgian Army, the German Army and many more.  The Belgian Army held a moving ceremony at the monument to the Belgian soldiers and civilians who died in the Great War.  Then the dignified parade to the Menin Gate began. 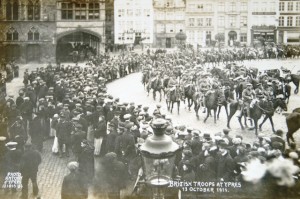 For those of us watching the occasion on the huge screen in the main square, the ceremony was poignant and unforgettable as it took place in the centenary year of the outbreak of WW1.  We thought of the hundreds of thousands of young men who fought and died in the Ypres Salient and on the other battlefields of the war.  We thought of the sacrifice of those who gave their lives, the suffering of the men who were wounded both physically and mentally and the hardship suffered by the civilians.  We thought of the four years of fighting that were to follow.

After the ceremony, our group saw the thousands of poppies planted in the ground at the top of the Menin Gate.  We then made our way to the Rampart Cemetery near the Lille Gate to pay our respects to the men buried there.  As we left Ypres, we reflected on the passage in ‘The Wipers Times’ which ended with the words:

And even when the busy hum of everyday life shall have resumed its sway in future days, still there will be heard in ghostly echo the muffled fumbling of the transport, and the rhythmic tread of soldiers’ feet.