“We were all terrified of our tug plane being shot down and having to ditch in the Channel. We were all weighed down by heavy equipment and would certainly have drowned. Anyway, I can’t swim.” 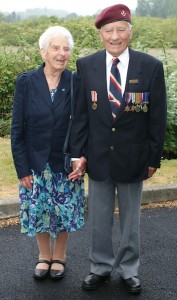 Pat Turner, recounting his story of his landing at Pegasus Bridge, 6 June 1944

As we approach the seventieth anniversary of the D-Day Landings, we felt it important to share recent  personal experiences we had with a veteran of the Landings, Pat Turner and his wife Barbara, whom we were privileged to have not once, but twice, on our Second World War Normandy Tours.

A truly remarkable man, Pat was originally in the Essex Regiment but  bored with guarding airfields, he leapt at the chance of becoming a volunteer for an unspecified special mission. Little did he know that he was volunteering for one of the most famous missions of the D-Day Landings, the capture of Pegasus Bridge. 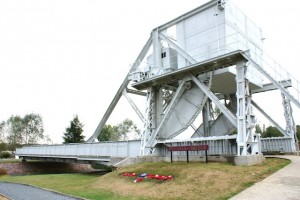 On our Normandy Tours, we visit Pegasus Bridge, where Pat landed in his glider during the bridge’s capture by British airborne troops on 6 June 1944. The sheer bravery and skill in undergoing such a mission cannot go unmarked and the feelings and thoughts that these men experienced are unimaginable. The story for Pat is a bitter-sweet one, as a friend and comrade, Fred Greenhalgh, was tragically killed during the mission after drowning , possibly becoming the first allied casualty of the Landings. Fred Greenhalgh’s grave can be visited at a nearby cemetery.

Pat’s presence on our D-Day tours was humbling, and everyone who met him and his charming wife Barbara, were deeply moved by his story, which was recounted in a reflective and dignified way. And let us also not forget that behind every great man is a great woman. Pat’s wife Barbara also played an active part in the Second World War, serving as a WREN.

Having Pat and Barbara on the tour added so much to our understanding of the Landings and the beginning of the end of the Second World War, not just the physical but also emotional strands, and the personal story behind Pegasus Bridge will stay in our memories for a long time to come. Thank you Pat and Barbara.